Fox’s The Gifted has just returned for 2019, and it looks like it’s going back to making cheap parallels to “real-life” politics. While the X-Men series has already made the comparison between mutants and illegal immigrants, this story goes further by inserting Fox News-type opponents who fear the “murderers and rapists” among the mutants and spew fake news. 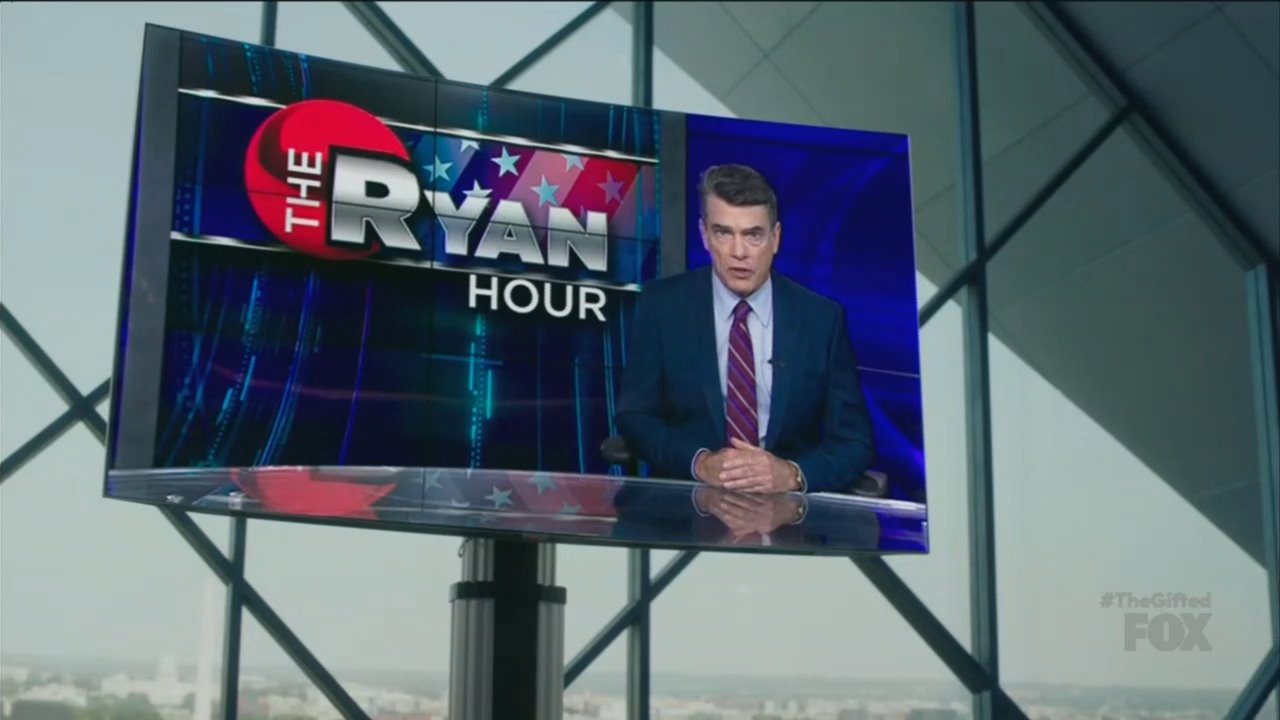 The January 1 premiere “eneMy of My eneMy” picks up shortly after the winter finale. In the finale, the mutant terrorist group The Inner Circle invaded and destroyed a company known as Regimen which controls every mutant prison collar (a collar that disables their superpowers) within the country. After Regimen falls, every imprisoned mutant in the country is free to use their powers to escape from their supposed captivity. Approximately 6,000 angry and super-powered mutants are now free, and I guess the show wants us to assume that they were all just innocent, helpless victims of a prejudiced society.

To prove that, the series gives us Benedict Ryan (Peter Gallagher), an obvious stand-in for their version of a Fox News/Sinclair anchor and a secret leader of the mutant-hating group the Purifiers. While the character has previously existed in the comics, he’s quickly becoming useful now as the writers’ conservative pundit punching bag. In this episode alone, he works as a scapegoat for both mutant critics and illegal immigration critics.

Two members of the Inner Circle, Lorna (Emma Dumont) and Andy (Percy Hynes White), watch and complain about his latest report on the finale’s events with his predictable, biased spin. This time it involves some obviously familiar words describing the mutants.

Ryan: And over 6,000 criminal mutants have escaped. People are asking: What's the endgame here? There is no endgame other than senseless slaughter.

Ryan: This is a nightmare.

Andy: Most of those people were innocent.

Lorna: You expect balanced reporting from that guy? His entire career is built on stirring up mutant haters.

Andy: Yeah, but people are gonna be watching that and believing it. I mean, we're-we're fighting for innocent mutants.

Ryan: These mutants are convicted murderers and rapists, and they're on the loose in our neighborhoods.

Andy: After everything we sacrificed.

Ryan: That's the time when regular citizens step up.

Andy: We should make them tell the truth.

Ryan: That's the American way. It's the only way.

It’s frustrating enough that shows like this push a clear leftist agenda, but now they’re harping on a misquote from Donald Trump more than two years ago. And even then, they use it incorrectly.

Andy claims that “most” of the mutants who escaped were innocent, implying that there are some, however negligible, that are not. However, it was Donald Trump who, in reality, acknowledged that not all illegal immigrants are evil by stating “some, I assume, are good people.” Apparently, the show can get away with saying some but not all the people in a group can be bad, but not the president.

Using that backwards logic as a political argument for their opponent only displays how utterly ignorant they are to reality or even the news. There’s only so far you can do that in a sci-fi series that’s supposed to feature a world different than ours. And that’s not to mention the not-so-subtle slamming of right-wing pundits “stirring up hatred.” If there’s anything a comic-book series doesn’t need, it’s wedged-in news commentary.

It’s also incredibly ironic that these two decry a man calling mutants “murderers” when they’re part of a group that clearly doesn’t prioritize human life. A previous mission led to more than ten bloody deaths alone. Andy himself declares by the end of the episode a new goal to wipe out the Purifiers stating, “We can't afford to have them running around, having more kids, spreading their poison.” If they aren’t murderers, they clearly don’t see murder as an altogether bad thing. They’re the last people to complain about “hatred.”

If this is a sign for 2019, things clearly aren’t looking up for television. Hopefully, we’ll get at least one more positive surprise before May.