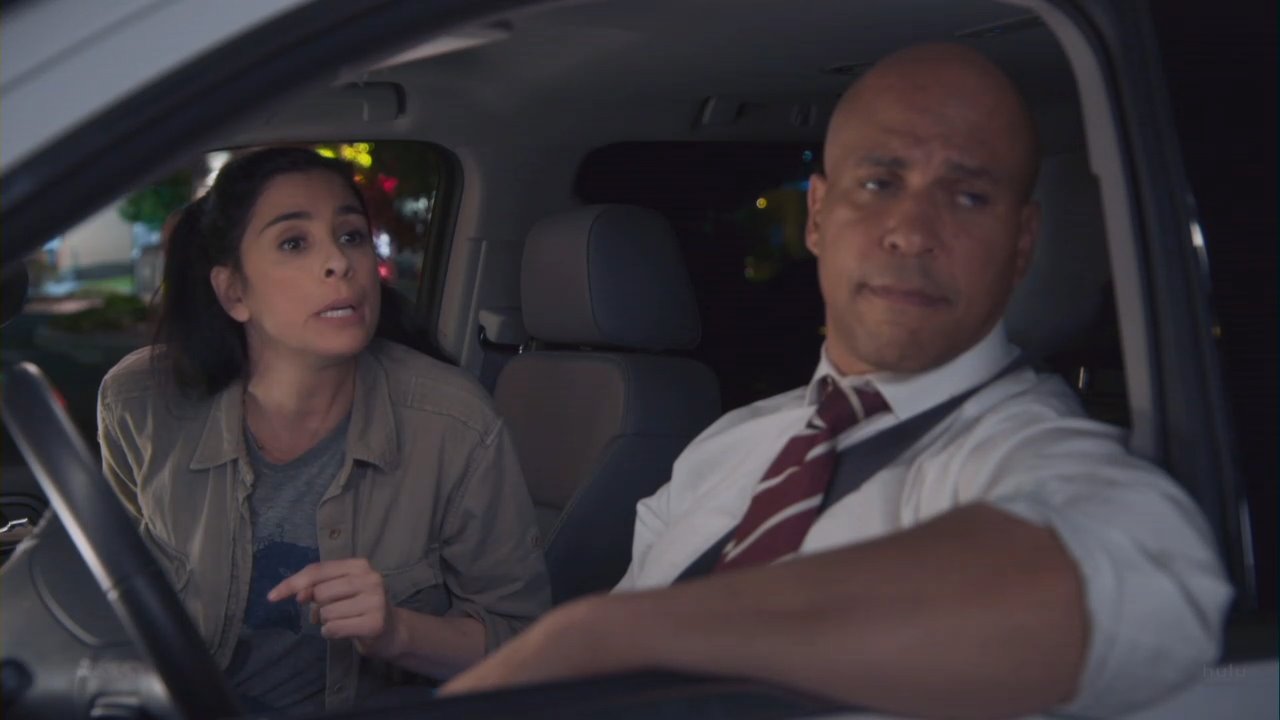 Really, every one of her opening monologues was some variation of “Trump is bad” or “conservatives are bad” or “the United States is bad” coupled with some crass joke. Sure enough, this latest “quickie” had Sarah insulting Trump for his recent rally where he called himself a “nationalist,” which she called “video of Trump saying the N-word.” She claimed he went “full Hitler” and that “his bigotry is no longer masked by his rhetoric.” She then bemoaned that even calling what he said “rhetoric” was like calling farts “pelvic wind chimes.” That’s pretty much the entire joke. She then appeared to pin the blame on Trump for the recent bomb scare: “We cannot be surprised to wake up to bombs at the doors of his favorite targets.”

Next, she proceeded to go on a rant against people she claimed use Christianity as a “shroud” for “personal hang-ups.” More specifically, she slammed Jeff Sessions forming a religious task force and Trump’s birth control mandate. Both of these things were apparently not for protecting the freedom of religion but for rolling back LGBT and women’s rights. As usual, the Republicans plus conservative Christians are the bad guys with no room for discussion or even a five-second Google search. Then again, she literally called herself a “godless” person while explaining all of this, so she pretty much admitted she has no idea how Christians should behave.

Following that was a sketch involving Sarah discussing immigration with Lady Liberty herself, played by Maya Rudolph. They talked about the usual content such as children being in cages without mentioning Barack Obama’s original role in those policies. Or how any immigration policy from Trump was pretty much racist. When Lady Liberty offered some encouraging words on immigrants, she ended with a jab against former president George W. Bush. Even the sketches have become predictable:

SILVERMAN: You know, I don’t know why we have to paint immigrants as other.

LADY LIBERTY: As one of your past presidents said, “Nearly all Americans have ancestors who braved the oceans, liberty-loving risk-takers in search of an idea. Immigration is not just a link to America’s past. It is also a bridge to America’s future.”

LADY LIBERTY: Shit. But then a minute later he said, “My feet smell like socks.” He was hit or miss.

The real highlight of the episode (if you can call it that) was spending time with Senator Cory Booker. Silverman devoted nearly one-fourth (seven minutes) of her 28-minute show to talking to and about the New Jersey Senator as they drove around New Jersey. In addition to practically filming a 2020 election ad, she also had him in a sketch where they order liberal policies like “sensible gun safety measures” along with their veggie burgers at a Sonic drive-thru.

Was this a comedy piece or his platform for running against Donald Trump? I’ve seen the entire episode, and I’m still not sure. What I am sure of was that the segment with Senator Booker led to a whole new set of issues.

For starters, it’s somewhat hypocritical for Sarah to spend two episodes calling Kavanaugh a horrible person for alleged 30-year-old sexual assault allegations yet giving a pass to Cory Booker, who admitted to groping a girl. Of course, Sarah is no stranger to hypocrisy, see the above “godless” quote for example. Second, did she really think she could get away with reaching out to America as she disparaged conservative candidates and lauds liberal ones? Hanging out with Cory Booker pretty much solidified her status as a liberal mouth-piece. That's a far cry from her original plan of "connecting with un-likeminded people."

As usual, the series keeps following a left-leaning perspective of the news, whether it’s propping potential presidential candidates or insulting conservative policies. Considering it’s barely funny at this point, I guess that’s all it can do now.