Woman Has Abortion 'Out Of Spite' on FX's 'Mayans M.C.' 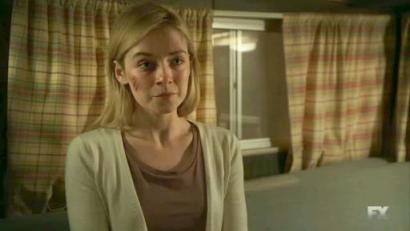 FX’s Mayans M.C. has been clearly political in its first season, from wall references to outright white supremacists. However, the latest episode tackled a topic even I was surprised about: abortion. What’s even more shocking is what they end up doing with it.

The October 2 episode “Uch/Opossum” continues an ongoing plot of cartel wife Emily (Sarah Bolger) dealing with the kidnapping of her infant son. In a desperate situation, she turns to her ex-boyfriend and Mayan prospect EZ (J.D. Pardo) for comfort, not knowing he works with her son’s kidnappers. During one encounter, she brings up the child she aborted of EZ's years ago “out of spite.”

Although this would normally get the NARAL seal of approval, I’m sure, the scene then takes a drastic turn when it comes to her real feelings.

EZ: No, Em. Yeah, I was an idiot. You had to take care of yourself.

Now here’s an interesting perspective. Feminists try to pass off abortion as empowering, but here’s Emily sobbing at the life she knew she had taken out of spite to hurt someone else. She even compares the child she aborted to her very alive baby boy. If a fetus is truly just a "clump of cells," why would she feel bad at all? The truth is, even 8 years down the road, abortion can leave a mark and, as we see from this scene, it certainly isn’t pretty.

Mayans M.C. is hardly the pinnacle of fine television, but it may have stumbled upon something truly inspiring. In a rare moment, we confront the truth about abortion. It ends a life, hurts the father and haunts the woman. Somehow, between all the cursing and killing, even this show can recognize that.