Looks like victimizing women might not be enough for Dietland anymore. After several episodes wallowing in female victimhood, the AMC series appears to go intersectional by hosting the oppression Olympics in a couple of scenes this week. As usual, the real losers are the viewers. 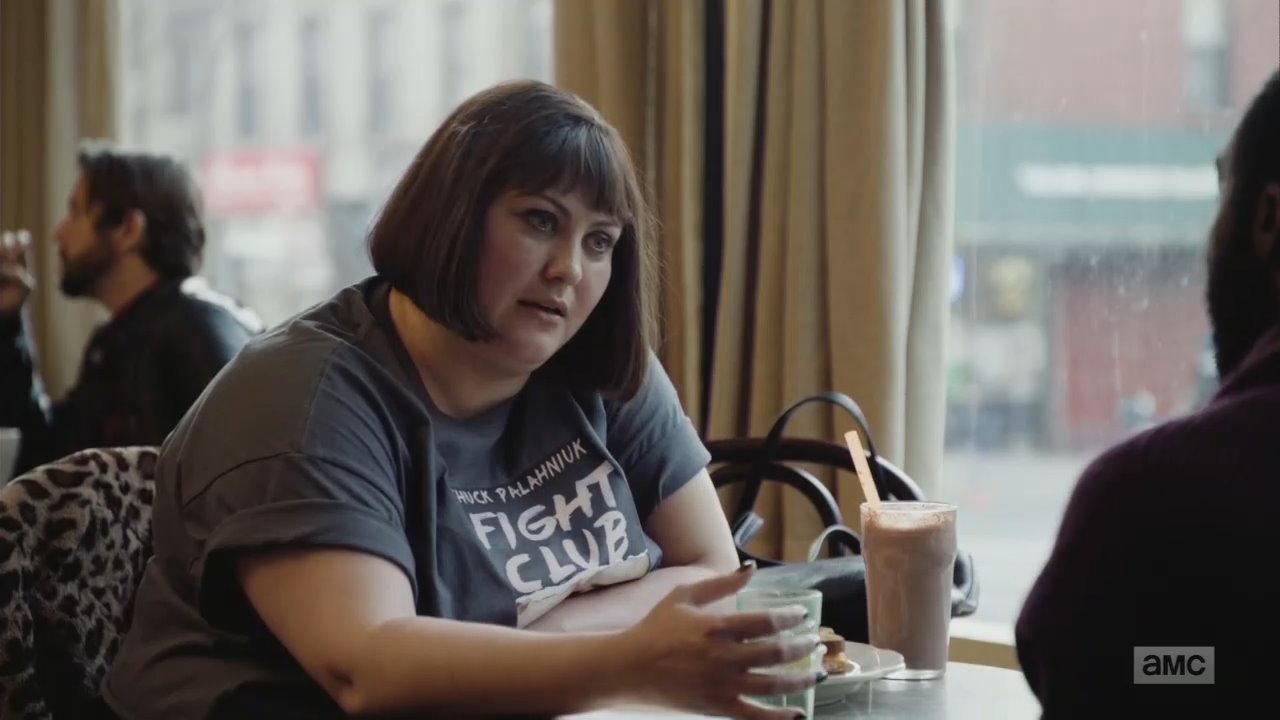 The July 9 episode “Monster High,” a co-ed inspired by the feminist terrorist group "Jennifer" walks into the university football team's locker room with a bomb strapped to her chest, killing herself and 9 men.

Shocked by this new cavalier attitude, her friend Steven (Tramell Tillman) attempts to reason with her but Plum tells him about her convoluted epiphany that men are predators and women are prey. In a bizarre turn of events, she claims that he, a gay black man from the South, is somehow less oppressed than she is because she is a "fat woman."

Plum: I could work my whole life to be someone's ideal, to be lovable to someone, and even if I get there, I'm still not safe. Say I lose the weight, get the surgeries, I fit in with all the perfect size twos of the world. All I've done is turned myself into better fodder for the predators. All my life I've been trying to turn myself into better prey!

Steven: Plum, you need to stay away from those people. Verena, all of 'em. It's not safe for you.

Plum: All right, ok, I know-- I know it sounds a little crazy.

Steven: A little crazy? It's alarming crazy. “Losing weight will turn you into better prey?” How about staying fat will kill you?

Steven: Look, Plum, I love you. But I'm gonna go hard here. You are not healthy. You are not well. I can't tell you how many times you have walked in here and huffed and puffed, and I was terrified that you were gonna have a heart attack and die on my floor.

Plum: I am healthy.

Steven: Listen, baby, please, don't do that, ok? What I am trying to say is that I think you need to—

Plum: No, I get what you're trying to say.

Plum: How would you know?

Steven: How?! I'm a gay black man from the South, Plum.

Plum: Who passes as straight. Who's moved to New York to escape the most of it.

Plum: Well, game over. Fat woman wins! I can't pass. There's nowhere I can go to escape. Not work, not home, not the bus, not even inside my own damn head. I'm not saying you're not oppressed. You are—

Steven: You known damn well what I've gone through, Plum.

Plum: And I'm saying you cannot understand what it's like to be me or any woman. We are not safe anywhere!

What is with shows trying to check people’s privilege now? Who suddenly decided that you could discern a person’s entire life experience by the way he or she looks? Furthermore, when did speaking truths like "being overweight isn’t healthy" or "not all women are victims" become controversial? As usual, the feminist series simply spouts these mantras as facts, never mind the logical fails.

Unfortunately, the rest of the episode only makes everything harder. Verona Baptist (Robin Weigert) confronts fellow feminist Julia Smith (Tamara Tunie) on the latest attack, especially after Julia’s intern Leeta is found to be a Jennifer terrorist. But in a fight between feminists, the conversation once again essential boils down to oppression points. Julia tries to claim the universal axiom "violence is never the answer" is only true for rich, white women. Another way of saying, "Check your privilege."

Julia: Leeta was working in a clinic with military rape victims. I was looking for something different to support. She was compelling. The cause, the women-- all of it was righteous.

Verena: You knew. She worked for you.

Julia: I lured her from Chico to be an intern, to do good works. She said the money was with the lawyers. Nothing about anything else. She knew I would have stopped her if she—

Verena: You would have stopped her? Really? With your radical ideas? Your poisonous, eye-for-an-eye ideas?!

Julia: Every women talks about revenge—

Verena: I don't! It leads to anarchy!

Julia: Bullshit! Don't get sanctimonious with me, Saint Verena.

Verena: Violence--I have said this-- violence is never the answer!

Julia: Maybe not for a rich white woman!

Verena: What about for rich black women? Hmm?

Verena: And yet... look what you did.

So a rich black woman has preference over a rich white woman, but an overweight white woman takes preference over a gay black man? Don’t ask me how they came to those conclusions, I still don’t understand the SJW hierarchy. Just assume everyone who isn’t a white, heterosexual man is right. It doesn’t get any easier or dumber than that.