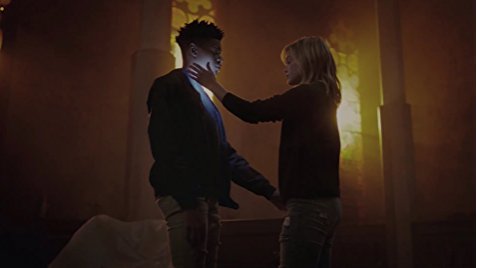 Freeform is known for having its overblown, progressive teen dramas, so Marvel’s Cloak & Dagger using the phrase “check your privilege” only mildly annoyed me. Following up with the belief that "this whole country's trying to kill [black people] every day," however, is where I would hope to draw the line.

After several chance encounters, Tandy (Olivia Holt) and Tyrone (Aubrey Joseph) finally decide to have a real conversation regarding their new abilities. The June 21 episode “Call/Response” kicks off a lengthy discussion between the two about their lives and their powers until it all comes to a head when Tandy admits she's had thoughts of suicide. This sets Tyrone off and they compare themselves to each other and engage in a SJW battle over which victim group has things worse.

The show suggests that Tandy can have a dead father, a drug-addicted mother, no way to support herself, and still be better off than Tyrone who is middle class, attends private school, and has both parents at home because he is black and she is white. Apparently Tyrone doesn't have the privilege of thinking about suicide because he's too busy trying to stay alive with the entire country constantly out to kill him.

Tyrone: What the hell is wrong with you? You have a life and opportunities, and you wanna waste it by killing yourself?

Tandy: No, I didn't say I wanted to kill myself-

Tyrone: No, I heard what you said! Look...your life isn't that bad, okay?

Tandy: Where do you live Tyrone? Good house? Good neighbors, you go to a good school-

Tyrone: You don't know me.

Tandy: I'm sorry that your two living parents care about you so much. Must be a real drag, sway.

Tandy: My privilege? I was just dropped off by a cop who told me that I can't press charges against a guy who almost...I had a lot of things taken from me. And everything I have, I had to steal because-

Tyrone: Because you can! You can walk into any room in this world and never be questioned! Try walking into a department store looking like me.

Tandy: That's not fair because I don't-

Tyrone: The world does! This whole country's trying to kill me every day. So excuse me if I can't afford to sit around and contemplate suicide. You know what, you wanna die so bad, why don't you just do it?

Tandy: You have your own death wish, choir boy, so why don’t you go to hell?

That’s certainly a new one, suggesting that white people now have the privilege of just being able to rob people. Also, apparently, being in poverty and having suicidal thoughts isn’t as bad as getting looks at department stores or being paranoid that everyone's out to kill you.

The entire scene just comes off as one liberal contradiction after another. Tandy has a sexual assault that goes unheeded by the police, but that gets buried by Tyrone's status as a black person. Tyrone tries to appeal to her emotionally to stop her suicidal thoughts but then discounts her experiences because of her supposed white privilege. This only quasi makes sense if you believe the entire country is targeting black people en masse, but despite Black Lives Matter's claims, statistics prove that is just not true. It’s about as nonsensical as suggesting that Barack Obama and Beyonce are somehow less privileged than homeless white people just because of their skin color.

The series switched Tandy and Tyrone's backstories in order to break television stereotypes but then falls back to social justice stereotypes just to produce drama. It's like the show can't even keep track of which SJW issue it's pushing anymore.

How about instead of "checking your privilege," we check the content of your character and not the color of your skin? It would save us all a lot of trouble.