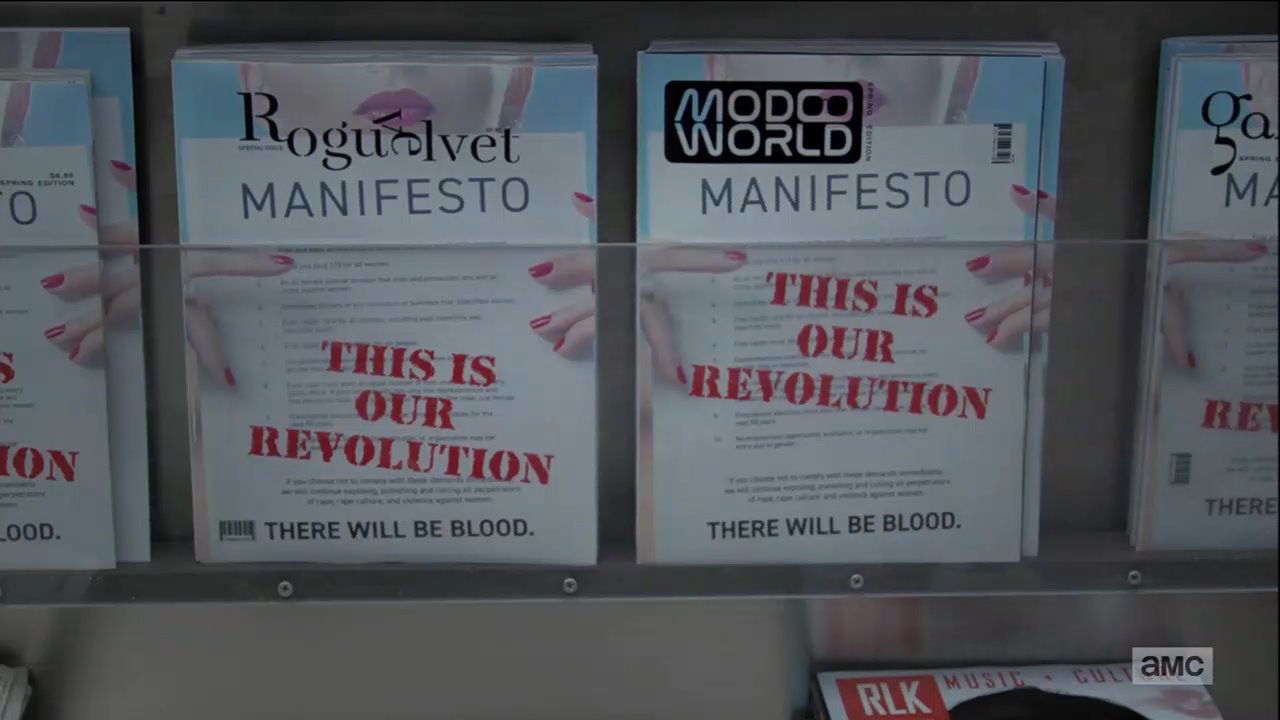 Sooner or later, every terrorist group comes out with a list of demands. The violent, ultra-feminist group in AMC’s Dietland is no exception as they finally make their demands known in the June 18 episode “F…This.” What a surprise, it involves equal pay plus reparations.

The extremist feminist terrorist group called "Jennifer," which has been kidnapping and murdering men accused of sexual assault, continues their reign of terror. All around the city, society begins to change from their actions in what is called “a new kind of segregation among the sexes.” Women now rejoice at being able to jog at midnight while men fear for their lives every day on the streets. This new normal is celebrated by the female populace who feel “empowered…like they matter” from the vigilante murders of alleged rapists. If this show can’t see how finding empowerment through murder is troubling, then I certainly can’t help them.

Anyway, Jennifer then begins the next phase of their plan by publicly threatening major corporations into publishing their manifesto. Although media mogul Kitty Montgomery (Julianna Margulies) initially refuses to give in to the group’s demands, she soon relents upon discovering Jennifer’s popularity among her impressionable female audience. She eventually orders her board to publish the incredibly ridiculous list of demands for the world to see.

Pablo: But they're all been printed.

Pablo: "An all-female judicial division, presidential elections must only offer female candidates for the next 50 years." What is this?

Kitty: I just told you. It's the cover. Make it pop. Maybe have a woman's hand holding it, or—

Pablo: "Equal pay plus one-third for all women." Come on, Kitty, I get putting this on Daisy Chain, but—

Kitty: I want the manifesto printed on every magazine in the catalogue. Oh, and get Digital to feature it on all the websites.

Pablo: Did Stanley sanction this?

These demands should be seen as humorous since the show is billed as a “dark comedy,” but they aren’t that far from reality. A bar in Portland, Oregon offered “Reparations Happy Hour” for black attendees, so why shouldn’t women be next? Some of these things actually sound like they could hit the Democrat platform next election cycle.

From what I’m getting here, it seems Dietland thinks two things empower women: unfair advantages in society and murder. I count my blessings that I am motivated by neither.