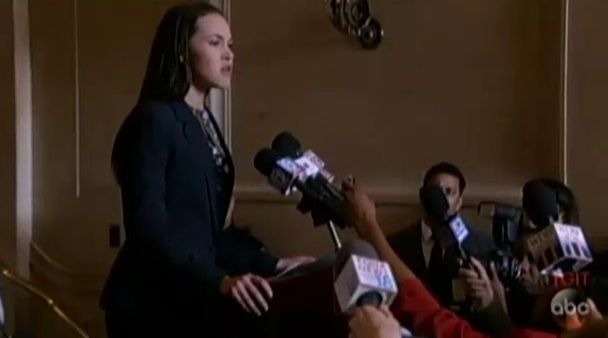 It only took fourteen episodes into the final season, but ABC’s Scandal has finally covered the #MeToo movement. The latest episode has Olivia and the other Gladiators working to expose the sexual offenders within Congress, because if there is anyone qualified to expose hidden sex perverts, it’s a Hollywood show.

The March 15 episode “The List” involved Olivia Pope (Kerry Washington) investigating the disappearance of a female Congressional intern. They soon learn that this woman, among others, was put on what is callously known as a “fresh meat list” where politicians and top staff rate the attractiveness of their interns and low-level employees. Furthermore, because this intern refused to have sex with her boss, she was quickly fired and blacklisted in D.C., with no job and no future. Faced with this life, the intern eventually killed herself.

Fortunately, with the help of the exposed list and a co-worker willing to testify, the news is exposed to the country following a highly-stylized press conference.

Meghan: Um... I'm here today to talk about the death of my friend and co-worker, Alisha Francis. A week ago, Alisha lost her job. A few days later, she took her own life. Before she was fired, Alisha made a courageous, professional choice -- one that, for her...ended in tragedy. Her choice was to decline to perform sexual favors for a man who had the power to help or hurt her in her chosen career. He punished her for that choice, not just with the loss of her job, but with a devastating assault on her professional reputation. If you're asking yourselves how I know all this, it's because I had the same choice to make, and I chose differently. I had sex with this man, and just as he promised, I was rewarded with a permanent position. I don't relish standing up here to discuss my sex life, but I see no other way to expose a culture where women cannot succeed on their own merits, but are instead judged by their attractiveness and their sexual compliance.

Reporter: Ms. Seeley's statement has prompted an outpouring of similar stories from other female Hill staffers -- some dating as far back as the 1980s. And a group of these women has even turned the tables on predatory men, compiling a counter-list of D.C.'s worst sexual offenders.

This announcement quickly leads into President Mellie Grant (Bellamy Young) attempting to enact a work harassment bill despite the direct opposition of some of the members in Congress. After all, Olivia remarks that “at some point or another, men would try to strip her of power” as a woman president. This motion to “dismantle the patriarchy” is therefore necessary.

Give me a break. These are the same people who proudly and sycophantly supported Hillary Clinton who famously mocked and belittled those who accused her husband of sexual assault. Now they want to stand up for the victims in D.C.? With real women suffering from real assaults, I guess they can rely on shows like Scandal to cover it…right when it’s politically viable. How charitable of them.