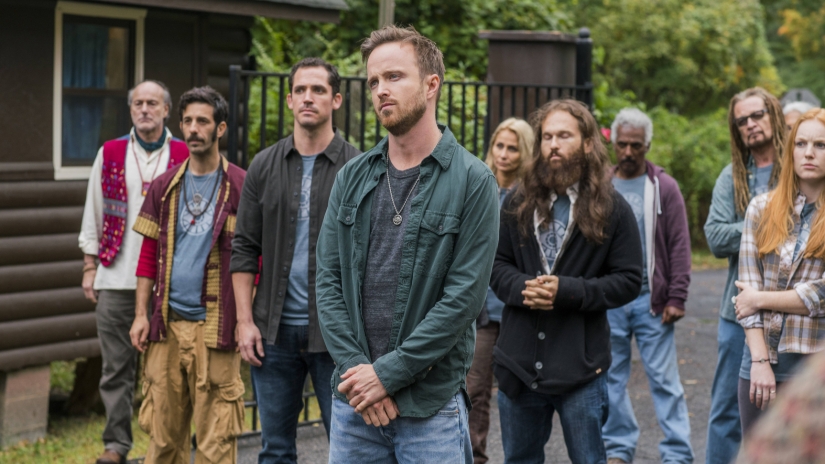 Hulu’s original series The Path recently returned for a third season by premiering three new episodes. Since the show follows a fictional religious movement, it’s appropriate that it, too, falls under the liberal cult mentality of Trump bashing. At least we’re all on the same page now.

Though never mentioned by name, the Trump administration is clearly a presence to many characters, even those within the fictional Meyerist Movement. The new leader of the Meyerist group, Eddie Lane (Aaron Paul), kicks things off in the premiere episode “The Beginning” by declaring, “We are living in a politically divided nation where marginalized groups are feeling more and more marginalized.” As a response, he proudly opens the gates to the group’s property, allowing anyone in if they so choose. The supposed irony’s not lost as people note that he’s “taking down walls when the whole world is building them up.”

However, the real irony comes later when the group’s garden is ravaged by an intruder due to the lack of security. Suddenly, it sounds like a wall isn’t such a bad idea after all. I guess it’s only a lousy idea if a Republican suggests it.

The subtle Trump jabbing continues in the second episode, “A Beast, No More,” when publicist Vera (Freida Pinto) goes after a campaign leader against the Meyerist Movement. To prevent the man from slandering the group any further, she threatens revealing his illegal status, stating that as of now “deporting undocumented people with criminal records is a big priority.” We can only be so lucky that it’s true for reasons beyond blackmail.

The tension finally comes to a boil in the third episode “Locusts” where Eddie catches the intruder who is revealed to be a runaway youth with a swastika tattoo. Seeing a bit of himself in the wayward character, Eddie offers him a chance in his movement to redeem himself. Despite not displaying any Nazi behavior and even admitting no ties to the group, the boy quickly faces mistrust and outright hostility from the supposedly open movement. When Eddie’s son Hawk (Kyle Allen) argues for being open to the newcomer, fellow Meyerist Joy (Stephanie Hsu) fires back, “You’re white. Maybe you can afford to assume that you’re safe, but some of us can’t.” Sure enough, a fight breaks out, and Eddie sends the youth back home with no clear lesson learned.

So acting opposed to walls, being selective about illegal immigrants, and fearing unproven Nazis are apparently now features of a fictional cult haunted by lies and corruption. Perhaps there’s more truth to this show than we think.