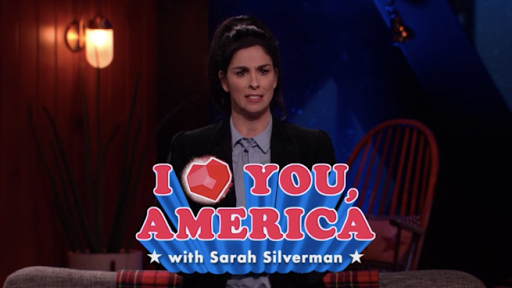 We’re only one episode away from finishing the first season I Love You, America With Sarah Silverman, and the end can’t get here fast enough for me. Until then, we still must suffer through yet another idea Sarah Silverman deems meaningful or just politically advantageous. This week’s concept involves the frightening white nationalism of…flying the American flag.

The December 7 episode revolves around the theme of nationalism and mostly about how creepy people who love America can be. Silverman literally opens her monologue recalling a time when she "felt very weird" and "scared" when her then-boyfriend was raising an American flag outside his house. If that’s a concern she has, it’s no wonder she works in the safe space of the entertainment industry. She can’t possibly survive in the real world.

Silverman: I had a boyfriend many years ago, he was my first boyfriend who had his own house, and one day I went outside to see what he was doing, and he was hoisting an American flag up the flagpole in his front yard. And I instantly felt very weird. It didn’t make sense, but I felt this feeling of like, um, I felt scared – yeah, I felt scared. So I was like, ‘Uh, what are you doing?’ and he said, ‘Raising the flag,’ and I was like, ‘Why?’ and he’s like, ‘Um, because I love America?’ and I was like, ‘Right, right, of course.’ But inside I was shaken.

And then I calmly walked to my car and I got inside and I called my sister Susie to tell her what happened. Now, maybe you’re thinking, ‘What do you mean what happened? Nothing happened, your boyfriend put an American flag up at his own house.’ No, you’re totally right, I had no idea why I was freaking out. I just - I had this very visceral reaction and my sister, who knows shit because she’s a rabbi in Israel, explained to me, she was like, ‘Dude, nationalism is innately terrifying for Jews. Think about it: flags, marching, blind allegiance? These things tend to ring a bell for us.’ Right. Of course. Duh. It made sense.

That makes her entire monologue on nationalism fall flat on its face. If someone can’t handle seeing an American flag outside a loved one’s house in America, I’m certainly not going to trust what they deem to be patriotic. Silverman says patriotism is loving your country, while nationalism is saying, "We're number one!" Apparently believing in American exceptionalism and that we are the last, best hope for mankind is one step away from Nazi Germany.

There are people who chant “America First” for all the wrong reasons, but attitudes like Sarah’s aren’t going to get rid of them. Instead, it makes them seem more mainstream when all the millions of patriotic Americans who proudly fly our flag are associated with Nazis. Shockingly, that doesn’t seem to bring people together.