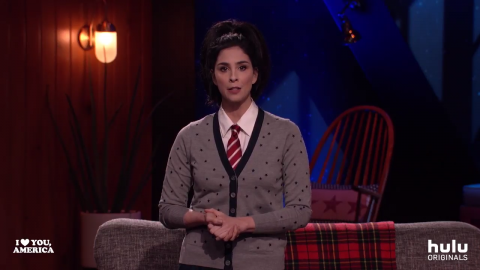 Hulu’s I Love You America with Sarah Silverman has been just one insult after another for conservative viewers. With the crass humor and not-so-subtle slams against President Trump, it’s hard to believe this was supposed to be a program about connecting people. In fact, this latest show might actually encourage more animosity between political sides.

In the November 16 episode, Silverman has a conversation with Christian Picciolini, a former neo-Nazi turned peace advocate. After discussing Picciolini’s background, they turn to how “leaders of the current administration” supposedly use “dog whistles” to signal the more racist parts of society. Picciolini equates references to the “liberal media” as a “more palatable” way of saying the “Jew-owned media.”

As a writer for a website with the tagline "Exposing and combating liberal media bias" at the top of the page, I can tell you emphatically that is NOT what "liberal media" means. We call out the liberal media because the media are literally liberally biased. Dismissing the phrase "liberal media" as a racist codeword is also a pretty convenient way to write off all criticism of the media's liberal bias.

Silverman cheers him calling out white supremacy by saying that since 9/11 white supremacists have killed more people on American soil than any other terrorist organization. Of course, as brought up before, the only way this statistic holds up is by ignoring 9/11 altogether, exaggerating the motives behind “racist” attacks, and covering up certain jihadist attacks like the Fort Hood shooting. It’s pretty convenient how those omissions make white nationalists a far bigger problem than they really are in the country.

Sarah Silverman also talks to us about hate speech in a monologue. Fortunately, there are no calls for banning it just yet (she defends the KKK's right to free speech), but there are still remarks about hate groups being “emboldened by our current administration,” like racists, bullies, and internet trolls didn’t exist before the 2016 presidential election. Every decent person already dislikes the KKK and racists (actual racists, not just anyone conservative), so this definitely doesn't count as a step forward to connecting people. Plus the divide is only made worse when you're using Trump as a scapegoat for "emboldened" racism.

Like her other episodes, this one also features a visit outside the liberal bubble with a Trump voter. However, all notions of understanding another opinion and reaching across the aisle are forgotten this time around as she speaks to someone she calls a “Talking Breitbart Post” who sells popular glasses in Hollywood. By the end of the visit, she doesn’t even pretend this moment contains anything but “vitriol” despite her preaching for open-mindedness.

At the end of it all, Silverman has the nerve to say the best way to reach out to people is through compassion. She exalts her own outreach like she's a saint, puts out misleading information, questions the sanity of the president, treats Trump voters like they’re an unknown species, and still expects us to take her moral platitudes seriously. I’m not against compassion or even just listening to the other side, but this episode might actually be one step back from reaching any compromise between liberals and conservatives.