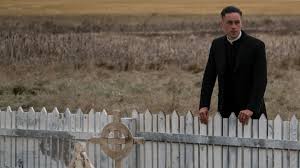 I’m getting this feeling that the USA Network does not care for capitalism, which is weird since they seem perfectly fine with using it to promote their latest show Damnation. While their other anti-capitalist show Mr. Robot takes place relatively in present day, Damnation takes us back to the Great Depression era to once again promote a revolution for the common man against the evils of the American economic system. The twist here is that the show manages to squeeze blasphemy in it as well.

The November 7 premiere “Sam Riley’s Body” sets up the series following fake preacher Seth Davenport (Killian Scott) helping to stir a farmers’ strike in a small town in Iowa in 1931 after the bank forces them to keep food prices down. Over the course of the episode, we discover that Seth has been traveling across the country in a similar manner to rile up the lower classes into rebellion against the banks and other corporate systems. However, this is the first time where he passes off as a preacher of the Lord and uses the pulpit to inspire people over to his cause.

Since he’s a fake preacher, Seth is pretty much the opposite of a man of God. In the first scene alone, he encourages a girl to steal from a local farmer and even teaches her how to steal more efficiently. When it comes to the word of God, he hardly fares any better as he calls parables “lies” and twists the Scripture to fit his communist-like agenda. It starts off with painting Jesus as a “revolutionary” crucified for threatening the power of the upper class to his own vulgar revision of the golden rule in this sermon.

Seth: Whatever I want men to do unto me, I should do unto them. As children, we were taught that the golden rule means to be kind. But we're not children anymore. And the golden rule is not an invitation to compliance. It's a call to arms. Because if I were to conspire as our banks, businesses, and government have all conspired to rip off the very people who grow our food and keep our nation strong, what would I want my fellow man to do unto me? I'd want him to break my fucking back.

Those opposed to Seth’s revolution are, of course, shown to be as villainous as possible. A detective and hired strikebreaker known as Creeley Turner (Logan Marshall-Green) follows Seth in hopes to quash what he calls “a homegrown Bolshevik uprising” in the United States. Sadly, his methods of halting a communist revolution include killing one of the members of the farmers’ strike and soliciting prostitutes for his work. I guess we can’t start sympathizing with someone who may consider communism to be a bad idea.

While there are fortunately no out-of-place references to the 1% or taxing the rich, that hasn’t stopped reviewers from making those modern connections for us. CNN reviews the show stating, “The result is a bracing look backward informed by present-day parallels, in another show that feels like an outlier for USA -- one that should have critical admirers but might struggle to satisfy TV's capitalist demands.” Vox calls Damnation “the latest show or film to feel accidentally timely in the wake of the 2016 election” thanks to the focus on angry rural folks turning to charlatans for an answer. I might need fancy liberal reviewers to teach me the relevance of communism in 2017 United States, but I don’t need them to remind me how dumb liberals think faith practitioners are. I’ve gotten more than my fair share going through Twitter tags.

It's a shame that now on the 100th anniversary of the Bolshevik Revolution we still have people who believe that communism deserves another try. It’s even worse when those people end up creating television shows to push that agenda. In light of this, I suggest celebrating your capitalist privileges and choosing something else to watch on Tuesday nights.