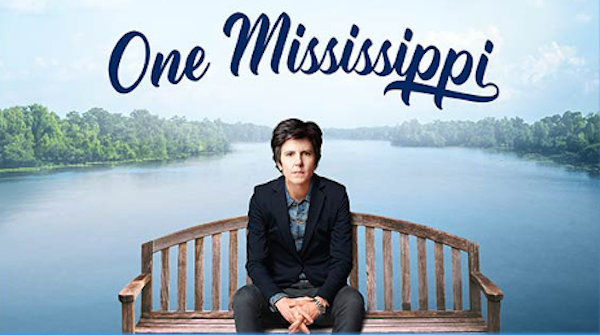 Amazon’s original series One Mississippi, which streamed its second season on September 8, focuses on a Los Angeles radio host, a lesbian named Tig (Tig Notaro), moving in with her family in Mississippi. The story follows semi-autobiographical scenarios based on comedienne Tig Notaro’s life, but the low hanging fruit of Trump-is-a-racist jokes, the modern day slavery remarks, and the jerkish Christian clichés won’t make this show stand the test of time.

Since this season takes place after November 2016, the unwritten TV rule demands for a reference to president Trump, even if the show has nothing to do with him. Throughout the season, Tig and her radio co-host Kate (Stephanie Allynne) pitch an idea to move their show to New Zealand to “escape Trump,” as if the last nine months posed any threat to them.

But the worst example comes from an interaction between Tig's brother Remy (Noah Harpster) and a Vietnamese woman named Vicky (Adora Dei) at a Civil War reenactment, when someone's behavior is immediately attributed to Trump's election.

Vicky: Hey Patrick, sorry for not tending to your wounds fast enough, I lost my footing.

Patrick: No sweat, just don’t fuck up again. Don’t let me die or whatever.

Remy: I highly doubt that will happen. Vicky is our top nurse.

Patrick: Yeah, but why are you even here?

Patrick: You know, there weren’t any Chinese people in the Civil War are you like playing a white person or what?

Vicky: I’m Vietnamese and actually there were Chinese soldiers in the Civil War. Quite a few.

Patrick: So our characters are probably fucking concubines. That’s awesome.

Vicky: Your friend is a real class act.

Remy: You don’t listen to him, he doesn’t know any better.

Vicky: Why is he saying it now, we’ve both been doing reenactments for years.

Vicky: 'Cuz he has permission now to be racist.

Remy: No he’s just – it’s like how you overlook the bad parts of Catholicism.

Vicky: That’s not the same thing at all.

Vicky: Who did you even vote for?

Vicky: You did nothing to stop a racist bully from becoming president?

Remy: There are other issues and not everybody who voted for him is a racist, either.

Vicky: Anyone who accepts racism is a racist.

Remy: I think you know I’m not ignorant.

According to this show, being a rude jerk apparently didn’t exist until Trump became president, or at least wasn't given "permission."

To hammer home the mediocre standards of these small-town minds, they introduce some locals who celebrate “Great Americans Day” and think of Robert E. Lee as anything other than bad. The bottom line is, if you didn’t come into this show despising Mississippians, you sure came out despising Northern know-it-alls.

In another plot line, Tig’s step-father Bill (John Rothman) begins taking an interest in his colleague Felicia (Sheryl Lee Ralph). The show doesn’t waste a chance reminding us that Felicia is black by having one of their dates interrupted by her spotting a portrait of a former slave owner. This show assumes black people glance at a picture and automatically feel oppressed, and Trump supporters are the ones who are racists?

Bill: Mrs. Josephine Kingsley. This restaurant is built on part of what used to be her land.

Felicia: It is a fine example of Antebellum portraiture but it's interesting enshrining Mrs. Kinglsey considering she was a slave owner.

Bill: She was but it is known she offered wages to her former slaves after the war, almost all of whom chose to stay.

Felicia: That woman owned other human beings. Now that may seem like one of many facts as to who she was but it is an immense evil that has had a dreadful impact on African Americans for centuries and will continue to do so. Why would anyone sugar coat that?

Bill: Forgive me. Should I say something to the maitre’d?

Felicia: That’s sweet but this is not an issue a maitre’d can solve.

Being the white ally he desperately wants to be, Bill dutifully begins educating himself on the racism of American society built from black slavery. It even comes to the point of Bill apologizing to Felicia’s family members for everything that has happened to the African-American throughout history. I hate to break it to the writers but, that’s not funny. That’s just sad.

Of course, a show following a lesbian lead would not be complete without anti-Christian bias. We are treated to not one but two instances in the show where locals attempt to discriminate against Tig simply because she’s gay - because religion hates the gays. We are just hiding behind bushes in southern states waiting to "pray the gay away," and that’s why we’re awful. Last time I checked, though, Christians weren’t the ones looking to shut down things like wedding cake bakeries just because they don't agree.

While the show takes time to mock Christians who shove their bias into everything, it feels absolutely no qualms about promoting its own gay agenda. Over the course of just six episodes, so-called “straight” Kate becomes a lesbian just so she can end up with Tig. Let me get this straight: being gay can’t be a choice so Christians can’t “pray the gay away,” but people are free to become homosexual at any point. Gotcha, that makes sense.

The standard for comedy used to be it’s funny because it’s true. Now it’s more like it’s funny only because the liberal writers tell us it’s funny, even when their jokes have long run their course. Will they ever learn their lesson? I think we have a better chance of Hillary Clinton blaming herself for anything.