AMC's 'Preacher': Jesus Fathered a Son, Lives in a Bunker

We’re past the point for me to say AMC’s Preacher has jumped the shark in terms of Christianity, but that certainly doesn’t stop the show from trying. This latest episode just introduced a background for Jesus Christ so crazy that Dan Brown’s asking questions.

The July 31st episode “Pig” features a look into the white-clad, violent religious organization known as The Grail that seems to be following and hunting Jesse Custer (Dominic Cooper) on his search for God. After a series of trials shown in a flashback, the group welcomes their newest recruit Herr Starr (Pip Torrens) to their mission to…well, let them explain it. I can’t type and roll my eyes at the same time.

Saltonstall: Welcome to The Grail.

Saltonstall: Please, Herr Starr, have a seat. For over 2,000 years, this organization has been at the very heart of world affairs. What do you think is the source of our enduring power?

Herr Starr: I would imagine a combination of economic influence and sexual blackmail.

Saltonstall: Some, of course. But the true inspiration of our authority is... Christ. ♪♪

Herr Starr: I was hoping for something more in the vein of atomic warfare, not myths and legends.

Saltonstall: This is no myth. Christ lives on.

Herr Starr: Yes, yes, he lives in our hearts.

Herr Starr: Does he?

Saltonstall: Yes. You see, before he sacrificed himself for our sins, our Lord gave a final gift to humanity -- he fathered a child. For generations, The Grail has protected this holy lineage in preparation for one event -- The End Of The World. Only God knows exactly when, but it will be soon. We have been assured from sources at the highest levels. And The Grail will be ready. And at the exact moment that hope is abandoned, our Savior will reveal Himself to the frightened masses.

Herr Starr: Ingenious. The world on its knees, begging for direction like the ugly girl at a gang bang.

Saltonstall: Your uniform. Some of the men find it a bit... Flamboyant. 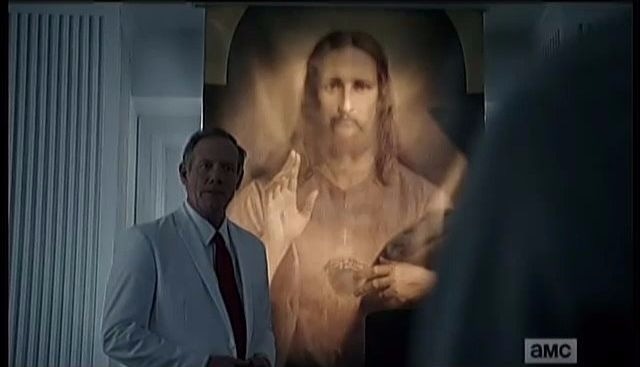 It’s nothing really new since liberals have been parading false religious doctrine for years, mostly under The DaVinci Code. Anything that remotely undermines that whole Jesus dying on the cross for our sins scenario seems fair game for the mainstream. Then again, even without that backstory, the show would be pretending that a deadly, world-ending group would have anything to do with Christianity in the first place. I’m beginning to think Preacher doesn’t care much for religion.