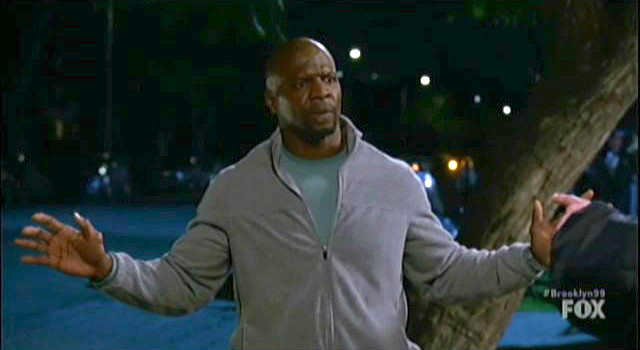 Fox’s Brooklyn Nine-Nine is usually one of the funniest shows in the humor wasteland of political correctness, but I guess that couldn’t last. The most recent episode decided to take a more serious and pointedly less funny approach to talk about racial profiling. Who knew that sitcoms weren’t the best places for one-sided racial politics?

In the May 2 episode “Moo-Moo,” Sergeant Terry Jeffords (Terry Crews) is stopped by a cop in his neighborhood as he looks for his daughter’s blanket. After being shaken by the incident, Terry attempts to talk the officer which begins the disappointing fall into clichés about race.

Terry: Officer Maldack. Thanks for coming.

Maldack: Hey. I'm really glad you set this up. I'm so sorry for what happened.

Terry: Oh. Wow. I am really happy to hear that. I was thinking this conversation was gonna go a lot differently.

Maldack: No, no. It was an honest mistake. I mean, if I had known you were a cop, I never would've treated you that way.

Terry: So you're sorry for not knowing I was a cop sooner?

Terry: And that's it?

Terry: But you shouldn't have treated me that way whether I was a cop or not.

Maldack: What do you mean?

Terry: I was just walking down the street. There's nothing suspicious or illegal about that.

Maldack: Okay, but you and I both know that you don't exactly look like you belong in that neighborhood.

Terry: I live there.

Maldack: Look. Nine out of ten times I get called to that neighborhood, it's about a guy that looks like you.

Terry: Were you responding to a call?

Maldack: No, but you're missing the point.

Terry: No, you're missing the point. I just want you to admit you only stopped me because I'm black and to apologize and say you won't do it again!

Maldack: Hey, look. We wouldn't even be having this conversation if you had your badge on you. Next time, don't forget it.

Terry: Oh, so this is all my fault?

Maldack: I'm not apologizing for doing my job.

Terry: That's not the job, man.

The situation predictably leads to plenty of discussion on the subject of race with all of the usual talking points not already mentioned above. To the show’s credit, with every character working in a police station, there is significantly less anti-cop rhetoric in the episode since, shockingly, most cops are not racists.

Unfortunately, the racial talk continues down to Jake (Andy Samberg) and Amy (Melissa Fumero) explaining racial prejudice to Terry’s daughters. There’s even a little feminism and sexuality for good measure.

Amy: Okay, girls. There's something called prejudice, which comes from the Latin words "Pre," or "Before," and "Judicium," which means "To judge." Are you with me so far?

Amy: Okay. Um, you know how it's tougher in this world to be a woman?

Lacey: Then I don't want to be a woman.

Jake: You don't have to be if that's who you are-- you know what? That's a whole other conversation. Uh... [Sighs] Okay. Here we go. A cop did a bad thing and tried to get your daddy in trouble, but your daddy didn't do anything wrong.

Jake: It is scary. But that cop was wrong, and what he did was bad.

Amy: And the most important thing is your daddy's okay, and he's not in trouble, and he loves you both more than anything in the world.

Jake: Yeah. Okay. Well, that wasn't so bad. Well, if you guys have any other questions, we're here for you.

Following the conversation, Terry goes to speak with Captain Holt (Andre Braughner) who initially advises Terry not to file a complaint to maintain a good image for a future higher position where he could make a difference in the precinct. Terry, however, argues against his captain and once again falls back to emotional talking points.

Holt: Terry, I know you're upset, but this is the right thing to do. You're this close to the City Council position, and that's just the beginning. It would be a shame to jeopardize that.

Terry: Look, I get that the guys in our precinct wouldn't profile me, but it still happened only one precinct over.

Holt: Which is why you need to keep pushing forward in your career, so that you can change the system. Terry, you're a great cop. You could become a chief or higher.

Terry: How long will it take to make change that way? Maldack is on the street now. You know why I became a cop?

Terry: Because when I was a kid, I always wanted to be a superhero.

Young Terry: Or I will defeat you! ♪ ♪ Whoa.

Terry: I wanted to help people like that cop helped me. But right now, I don't feel like a superhero. I feel the opposite. When I got stopped the other day, I wasn't a cop. I wasn't a guy who lived in a neighborhood looking for his daughter's toy. I was a black man, a dangerous black man. That's all he could see: A threat. And I couldn't stop thinking about my daughters. And their future. And how years from now, they could be walking down the street, looking for their kids' Moo Moo, and get stopped by a bad cop. And they probably won't get to play the police card to get out of trouble. I don't like that thought, and I'm gonna do something about it. So I don't care if it might hurt my career. I'm filing that report. Even if I have to go over your head to do it.

Holt: Kind of seemed like you were gonna get up and leave after saying all that.

Terry: I was, but I think I hear Margo.

By no means am I saying Terry, or anyone, deserves to be stopped by an officer for simply being black, but the show unfortunately takes a shallow approach to deep topic. There’s no mention about the victims of criminals thanks to non-attentive cops or the fact that most cops aren’t stopping black people because of prejudice. For anyone who says that it would be too much to mention in under thirty minutes, remember that they were the ones who brought it up in the first place. Don’t start a game you can’t win.

Fortunately for us, the way things work on this show, we'll probably never have to hear about this again. We can only hope.