Aborting unborn babies with Down syndrome “hearkens back to neo-Nazi Germany,” according to Sarah Palin. 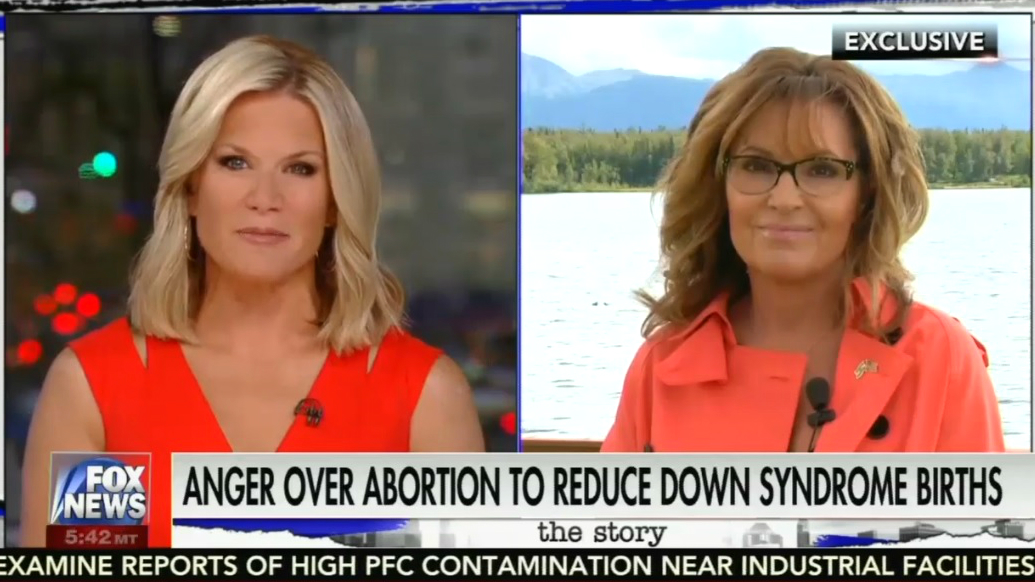 On Tuesday, Fox anchor Martha MacCallum invited former Alaska governor and GOP vice presidential nominee Sarah Palin on her show, The Story, to discuss a CBS report claiming that Down syndrome is “disappearing” in Iceland. CBS got it wrong: rather than the genetic disorder “disappearing,” unborn babies with Down syndrome are “disappearing” – via abortion.

“Shocking report from CBS News is opening eyes about what is going on in Iceland and other countries,” MacCallum began her report. “The country is boasting that they have now virtually eliminated Down syndrome. Not with any cure but by abortion.”

MacCallum asked Palin for her reaction to the story. Palin, who has a 9-year-old son with Down syndrome, drew from her personal experience.

“We couldn't get through all of it – all of the report – without my heart just absolutely breaking,” Palin began, “because this intolerance for people who may not look like you is, it’s just so – it's so wrong. It's so evil.”

She stressed that those with Down syndrome add beauty to the world.

While she praised Iceland as a “beautiful country,” Palin added that "I think Iceland won't be so beautiful if they continue down this path of being so intolerant to the degree of trying to snuff out the life of those who maybe do not look like the subjective view of someone that would equate to perfection."

Palin noted that Down syndrome children have different skin, eye shape and speech patterns – but that that doesn’t make them any less precious. She went so far as to compare the destruction of these children to Nazi Germany. Video below.

“Those things that make them so unique, make the world more unique and more beautiful, and to try to snuff out their life in the name of building a perfect race or a perfect country,” she argued, “that hearkens back to neo-Nazi Germany when they tried the same and look at the horrors that were resulting from those actions.”

She slammed CBS for the network’s report of the story.

“So to see a report today, brought forth by, I think it was CBS who reported this, and with this celebratory tone that ‘oh, yay, we’re going to eradicate those who may not look real perfect like we look,’” she said. “Yeah, right. You know, I think it's a very disheartening trend. It's very tragic.”

In response, she called for action by other mothers.

“Especially young mothers who are facing less than ideal circumstances in their pregnancy, finding out that maybe their child will have Down syndrome or some other challenge to come, we can help them be less fearful by speaking proudly about those that we have in our lives who bring so much joy,” she concluded.

During the interview, Palin recalled when she discovered her son Trig might have Down syndrome.

“I was full of fear. I had to really be brought down to my knees and ask God to change my heart and prepare my heart and my eyes and my understanding of the purpose in my son's life,” she admitted. “And He certainly answered those prayers because the minute that Trig was born, the fear went away.”

“Who are we without love and acceptance?” she asked. “Who is Iceland or these other countries that are condoning the idea of eradicating those with Down syndrome? Who are they without love, without that respect for the sanctity of all life?”

Palin has opened up about Trig to the media before, calling him a “gift.” While comedians have made tasteless jokes about her little boy, outlets like People magazine have regularly covered and posted “adorable photos” of him.