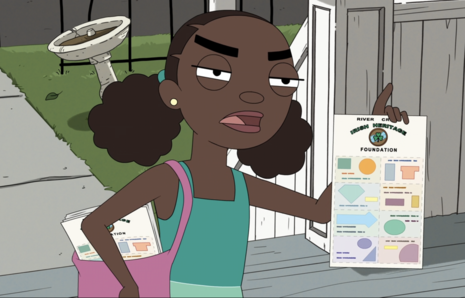 The Harper House on Paramount+ follows Debbie Harper (voice of Rhea Seehorn) and her family as they struggle to adapt to their new life after Debbie loses her job and they must move from the wealthy side to the poor side of a small Arkansas town. They are a woke liberal family so it is not at all surprising that the episode that began streaming on September 30, titled “Baby Talk/Coupon Kid,” centered on white guilt and black neighbors.

One day, school girl Shauna Bradley went to the Harper house selling coupon pages for the "Irish Heritage Foundation." Dad Freddie (voice of Gabourey Sidibe) tried to turn down her sales pitch but Shauna persisted, throwing the race card, “C’mon, man. You’re white. Are you saying that you don’t have money for a girl like me?” Immediately Freddie caved and gave her the $20 she requested.

After Shauna left, Freddie admitted he didn’t want to buy the coupon page but couldn’t turn her down. Todd (voice of Ryan Flynn) and his sister Ollie (voice of Tatiana Maslaney) told their father that he was probably scammed as Shauna has a reputation at school for being cunning and all the teachers are scared of her.

Todd: I'm pretty sure she just took advantage of your white guilt, dad.

Ollie: Todd, Dad’s life dream is to have black friends and to have all black people like him.

Todd: Then why didn’t we see any black people in real life until we moved to the north side? I mean, isn’t that a bit racist?

But Freddie brushed them off saying, "Whatever, she's just a kid."

After Freddie took Ollie’s soccer team for post-game fast food and tried to pay for it with the coupons, he found out they really were a scam. Freddie said he couldn’t believe a “cute little black girl” would scam him and confronted her at the next soccer game when Ollie’s team played Shauna’s team. Instead of agreeing to give Freddie’s money back to him, she offered to return his money through a bet on the game. Naturally, she outwitted Freddie and he lost more money to her. Freddie is portrayed as a stupid white man who is unable to outsmart a pre-teen girl.

Freddie went to talk to Shauna’s father, Gbenge Bradley (voice of Gary Anthony Williams), to tell him about what his daughter was doing, but at first Gbenge refused to believe his daughter was a con artist. He told Freddie that he also purchased a coupon page from Shauna, but soon realized that they were both scammed.

Upon closer inspection of the coupon page, Gbenge revealed that Shauna set up the Irish Heritage Foundation because she knew that white people would contribute to it. It funds her soccer team and she funnels money to the school through it. Gbenge acted proud of his clever con artist daughter and Freddie lamely said in response, “She’s like Robin Hood,” and asked for a selfie with Gbenge. Please.

White family men are often portrayed as buffoons in television shows, even animated ones. This is another one of those shows. The strong, aggressive mother in the family is the income-earner while the father is a househusband. The family doesn’t show a lot of respect for him and he is often taken advantage of by others. Well, at least this time the ridicule was at the expense of a woke white liberal.