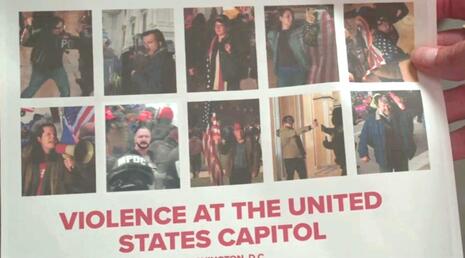 Kurt McVeigh (Gary Cole), a top official at the Veteran’s Administration (appointed by Trump), is married to Diane Lockhart (Christine Baranski), a name partner in a Chicago law firm. Kurt is conservative and Diane is a liberal feminist. Kurt’s office undergoes some changes due to the Biden administration coming into power. In the meantime, Kurt sees a 10 Most Wanted by the FBI flyer of people who are suspected of taking part in the January 6 riot posted on a bulletin board in a hallway at the V.A. Kurt thinks he might recognize one of the men.

Kurt takes a copy of the FBI flyer home where Diane stumbles across it.

Diane: Kurt? I delayed the reservation, so I think we can still make it. Babe? I'm pouring a drink. Do you want one? Who is this?

Diane: Well, you just drew in a... a beard and a mustache on him.

Kurt: I was doodling.

Diane: You-you don't doodle. In fact, you're the exact opposite of a doodler. Who is it?

Diane: But you suspect. I mean, if it's one of the insurrectionists, then you need to tell the feds.

Diane: Well, who do you think it is?

Kurt: Just somebody I went shooting with.

Kurt: No, he didn't talk that way. He wasn't political. He's a veteran.

Kurt: Yeah, and I don't drop a dime because he fits a profile.

Diane: What is this, a schoolyard? Drop a dime? This man tried to hang the vice president. He tried to kill Nancy Pelosi.

Kurt: You don't know that, and I'm not gonna be responsible for naming names.

Diane: This is not McCarthyism.

Kurt: Actually, it is.

Diane: They stormed the Capitol!

Kurt: The feds will threaten me with indictment if I don't name names. Even if I'm not sure if they're responsible. And then they will be asked to name names, and everybody will get lawyers, and... and those are the only people who will benefit.

Notice that Diane is quick to blame veterans and men who shoot at gun clubs as violent people who would be "insurrectionists."

Diane decides to take matters into her own hands and reports the man to the FBI anonymously. The wanted man is named Dylan Pike and it turns out he also asked Kurt to set him up to take a tour of the Capitol, as he was going to Washington, D.C. Kurt called a congressman’s office and arranged for Dylan to take a tour on January 5. After an interview with FBI Agent Madeline Starkey (Jane Lynch), Kurt learns that Dylan told the agent that Kurt also laid out a strategy for entering and occupying the U.S. Capitol. Kurt refuses to name the congressman that he called, though.

Diane becomes Kurt’s lawyer when they realize he’s potentially in trouble. Diane tells him, “I think that you’re a Trump official who trained an insurrectionist in firearms and then arranged for them him to scout the Capitol. I think that’s the definition of trouble.”

Diane meets with the Agent Starkey briefly to find out what she can about the investigation. Diane tells her that she thinks all the rioters "deserve to be locked up." Later, Kurt and Starkey meet in Diane’s office for Kurt’s statement. He still refuses to name the congressman so the FBI agent threatens to get a subpoena.

Starkey stresses that the main concern is to head off any other events like the riot on Capitol Hill, "My concern isn't with their past. It's what they might do in the future...now that they've gotten away with, say, trespassing, or smearing their feces on the floor of the rotunda, they're emboldened to violence, to bombs, to hostage taking."

That is where the episode ended. It is interesting that the fictional FBI is concentrating on the rioters as the real-life FBI is doing, and trying to tie Trump officials and congressmen to the event to boot. No big searches or Most Wanted lists for the Black Lives Matter rioters in the cities across the country, though. We’ll see how this turns out for Kurt. Will he keep his job even though he was appointed by Trump to the V.A.? Stay tuned.