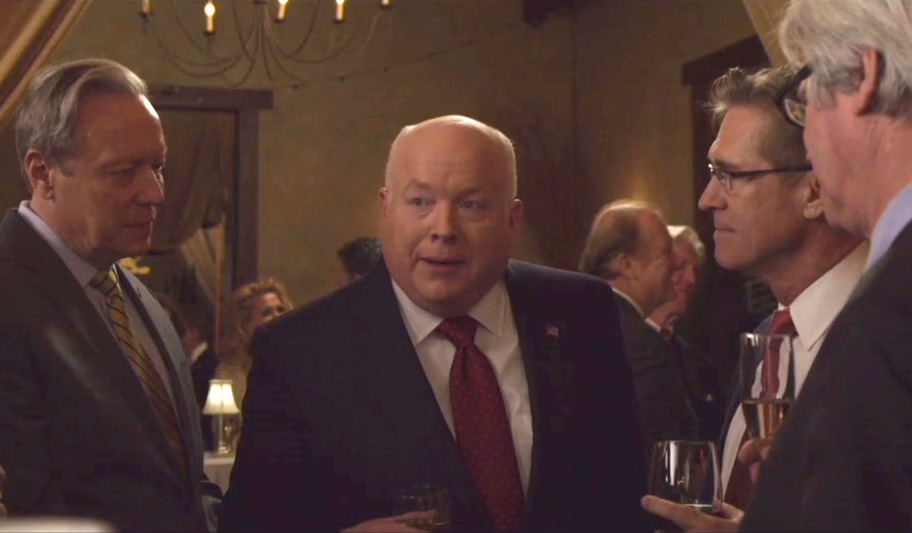 In the March 21 episode of CBS All Access’s The Good Fight, titled “The One Inspired by Roy Cohn,” Trump-deranged liberal feminist lawyer Diane Lockhart (Christine Baranski) seethes with anger whilst scrolling through Eric Trump’s Instagram account full of bloody safari trophies. Much to Diane’s distress, she's learned that her hunting tour guide husband Kurt McVeigh (Gary Cole) was not treated for 48 hours after being shot at the hands of one of President Trump's sons.

But she is soon distracted when she arrives home to find Kurt already there and putting a bow on a beer for her to help celebrate his new job. Unfortunately for Diane, Kurt has accepted a position as Regional Director of Veteran Affairs which is due to a recommendation from the Trump sons - who she refers to as "Hans and Franz." While Diane is excited that Kurt will be able to remain in Chicago with her full-time, she is bitter that the Trump boys are involved in their good fortune. Kurt can’t talk about the details in how the job offer came about because of the NDA he signed with the Trumps. By the end, Diane is so triggered she can't even handle hearing the word "trump."

Due to his new position, Kurt is invited to a fundraiser for a U.S. Senate candidate, a Republican. The older white man is naturally portrayed as a racist making jokes about Mexicans and he makes a point of calling President Trump “the most pro-life President” ever.

Pro-abortion Diane is not a fan of this man and secretly records his cocktail conversation, no doubt to use later. When she and Kurt are back home, he asks her to delete the conversation. Much to my surprise, she did. But not until after comparing it to recording the infamous Nazi propaganda minister Joseph Goebbels.

Also, a part of this episode features the search for a new attorney for the firm's matrimonial law division. One young African-American man is moving through the interview process smoothly until it is discovered by the liberal feminist partner, Liz Reddick-Lawrence (Audra McDonald), that the man is a member of the Historical Law Society (think Federalist Society) and he helped prep Judge Brett Kavanaugh for his Supreme Court nomination hearing. Oh, the horror! So, Liz encourages Lucca, a young female attorney already employed with the firm to go after the job instead. Lucca wins it.

This show exists pretty much because of the election of President Trump. Rest assured if Hillary Clinton was in the White House there would be no show on CBS or its streaming channels meant solely to disparage her and her family. The political double standard is alive and well in Trump’s America.