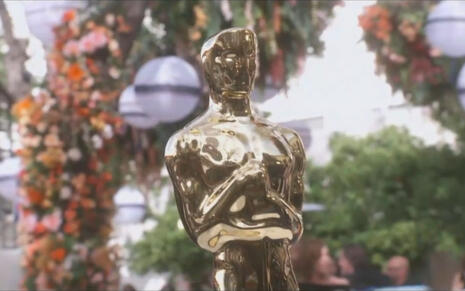 From the beginning until the end, the 93rd Annual Academy Awards was loaded with Black Lives Matter wokeism. Airing on ABC on Sunday night, the show began with self-described "preaching" from actress/director Regina King on the Chauvin trial in Minneapolis and the dangers faced by black men.

The tone was set and the show was none the better for it. It was an unusual set up for the Oscars this year, with no host, and a non-theater location. There were none of the traditional time constraints for acceptance speeches, no music suddenly beginning as a cue for the winner to wrap it up, little to no movie clips - the pacing and production quality were shockingly bad for Hollywood.

Presenter and actress Laura Dern was insufferable to endure. She spoke slowly and added her own twist to introducing nominees for Best Supporting Actor, saying, "Each of these five artists presented us with themes of equity and social justice in their own unique and extraordinary ways." She personalized the introductions as though she was the center of attention. It was awkward to watch.

Daniel Kaluuya won Best Supporting actor for Judas and the Black Messiah, a film about Black Panther Party Chairman Fred Hampton, and had high praise for both Hampton and the BPP. The admiration for Marxism/Stalinism found in the Black Panthers movement is alive and well.

A Best Live Action Short award was given to a BLM short film on police brutality. The winners exaggerated the statistics making it sound like police are just hunting out innocent people all year long while pleading with the audience, “Please don’t be indifferent to our pain.”

A short animated film on gun violence filmed through the eyes of parents grieving over the loss of their child in a school shooting, If Anything Happens, I Love You, brought a demand from the winning team of writers: “We deserve better than to live in a country where more than 100 people die by gun violence every single day. We must and will do better.” Perhaps they can start with Chicago.

During her introduction to the In Memoriam portion of the show, actress Angela Bassett spoke about the people who have lost their lives due to COVID-19 and then she took the opportunity to include others – “we wish to also acknowledge those precious lives lost to the violence of inequality, injustice, hatred, racism, and poverty. To all of those who left our lives too soon, we cherish the moments that we had the honor of having with you."

Singer/songwriter H.E.R. won for Best Song, "Fight For You" from Judas and the Black Messiah. She thanked her parents and her collaborators and then she launched into her turn on the social justice soapbox.

“I just want to say this. You know, musicians, filmmakers, I believe we have an opportunity and a responsibility to me to tell the truth. And to write history the way that it was. And how it connects us to today. And what we see going on in the world today. And, yeah, I'm just -- I have no words. I'm just so, so, so happy and grateful. And, yeah, knowledge is power. Music is power. And as long as I'm standing, I'm always going to fight for us. I'm always going to fight for my people and what is right.”

Tyler Perry was presented with the Jean Hersholt Humanitarian Award. He brought the show back for the far left by encouraging people to meet in the middle, to avoid extremism of any kind.

Tyler Perry: Thank you. Thank you. That is -- that's incredibly kind. Thank you so much. They only gave me a few minutes. So I want to say a very special thanks to Ms. Viola Davis. To the board of governors, to Whoopi Goldberg, Ava. When I set out to help someone, I'm not trying to do anything other than meet somebody at their humanity.

I remember one time, about 17 years ago, I rented a building, using it for production. I saw a woman, I said, she's homeless, let me give her some money. I'm about to give her money, she says, sir, do you have any shoes? It stopped me cold. I remember being homeless, and I had one pair of shoes, they were bent over at the heels. We go to wardrobe, and there were all these boxes, fabrics, racks of clothes. We had to stand in the middle of the floor. As we were standing there, we found some shoes, she's looking down. She finally looks up, she has tears in her eyes. She said, thank you, Jesus. My feet are off the ground.

In that moment, I just -- I recall her saying to me, I thought you would hate me for asking. How can I hate you, when I used to be you, when I had a mother who grew up in the Jim Crow south in Louisiana, right across the border in Mississippi. At 9 or 10 years old, she was grieving the death of Emmitt Till. And the death of the civil rights boys, and the little
girls in the bombing in Alabama. And I remember coming home, she was in tears. She said, there was a bomb threat. She couldn't believe that someone wanted to blow up this place where she worked, where she took care of the toddlers, it was the Jewish community center. She taught me to refuse hate and blanket judgment.

In this time, with all of the internet and social media and algorithms that want us to think a certain way. The 24-hour news cycle. It's my hope that we teach our kids, refuse hate. Don't hate anybody. I refuse to hate someone because they're Mexican or because they are black or white. Or LGBTQ or Asian.  I refuse to hate someone because they are a police officer. I would hope we would refuse hate. And I want to take this humanitarian award and dedicate it to anyone who wants to stand in the middle. Because that's where healing, where conversation, where change happens. It happens in the middle. Anyone who wants to meet me in the middle to refuse hate and blanket judgment, this one is for you, too. God bless you, and I appreciate you, academy. Thank you.

To say that this awards ceremony was boring is an understatement. It is no wonder that ratings have been so bad for these shows – who wants to turn in and listen to Hollywood one-percenters scold their audience about the hardships presented because of social injustices? The pandemic has shown us that the entertainment industry has forgotten how to entertain us. The movies up for awards were all filled with messages, not entertainment. The industry is more focused on social activism, not entertaining their consumers.