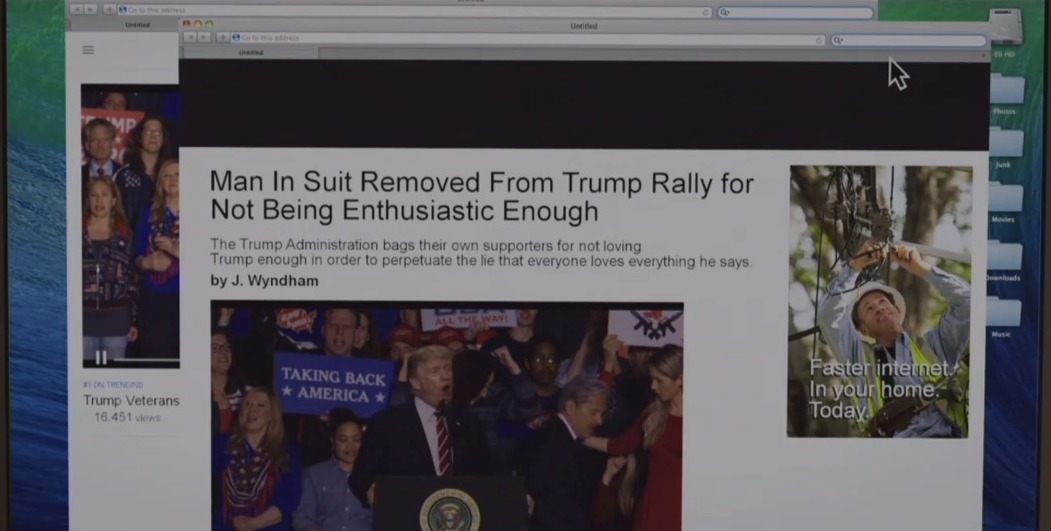 The final episode of season three of CBS All Access’s streaming show The Good Fight aired May 16. It’s a given that the show is anti-Trump. The writers portray President Trump and his administration in the worst possible ways on a regular basis. But this episode, titled “The One About the End of the World,” includes an odd scene, even for this show.

Diane Lockhart’s (Christine Baranski) husband, Kurt McVeigh (Gary Cole), is asked to introduce President Trump during an event in Wisconsin and then to stand on the stage with other administration officials and supporters. Kurt is the Regional Director for V.A. Affairs in the Chicago office and a Trump appointee.

When Diane learns that Kurt is writing an introduction for Trump, she first balks at his nice words and then she decides to help write it. She remembers that she loves her husband and wants to help him, despite her disgust with the president.

During the televised event, Diane is watching online and she sees that Kurt is standing behind President Trump. Kurt is looking quite stoic, though, and not applauding and smiling in approval of the president’s speech. Diane is quite pleased at that. And then, just like that, two women approach Kurt and one takes his place on the stage as the other escorts him away. What in the world? That’s not a real thing that happens. The moment goes viral, beginning with an article titled "Man In Suit Removed From Trump Rally for Not Being Enthusiastic Enough."

That night as Diane and Kurt are in bed, Diane tells Kurt, “You’re my hero.” He is his usual modest self and reassures Diane that everything will be ok when she asks. Then they hear a creaking sound coming from the bedroom door. The camera moves to just outside the door and we see a S.W.A.T. team about to storm the bedroom. The team leader uses hand signals to count down, 3, 2, 1… and the scene is over. The credits roll. Talk about a cliffhanger!

I’m sure we will find out next season that the S.W.A.T. team is there to make good on a threat issued by The Book Club’s Rachelle Max (Kate Shindle). Earlier in the episode, Diane asked an associate at her law firm to get Rachelle to back off her threats after Diane quit the resistance group over their deadly decision to use swatting against those they oppose in the Trump administration.

Trump derangement syndrome is as strong as ever for those in #TheResistance. It includes normalizing acts of violence against political opponents. At least this time the violence isn't justified.