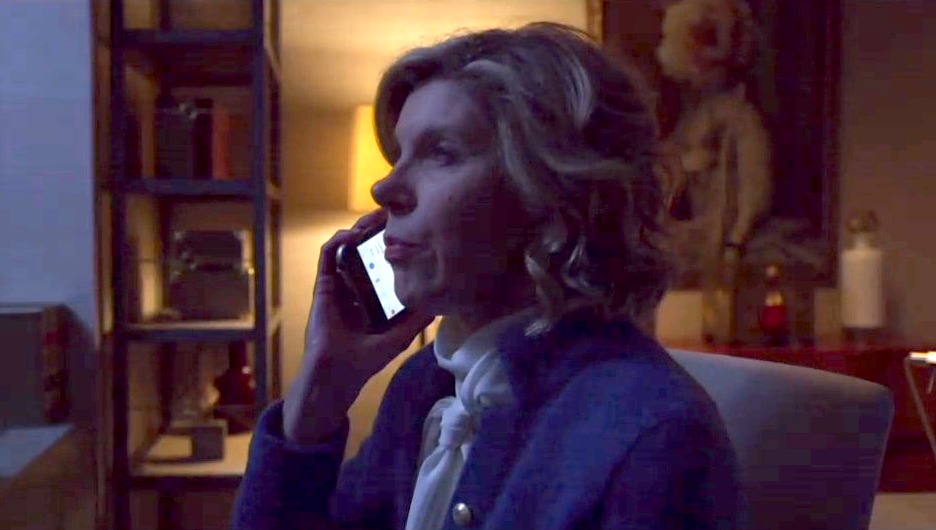 A video using President Trump and fake news stories “beating us black and blue” is being shown to a group of #Resistance enthusiasts as the latest installment of the CBS All Access streaming series The Good Fight opens. In the March 28 episode, titled “The One Where Diane Joins the Resistance,” the show’s main character does officially join a resistance group.

The decision made by liberal feminist lawyer Diane Lockhart (Christine Baranski) to join a splinter group of resisters is a bit redundant if you have any knowledge of Baranski’s character on the show. The show was literally recreated to voice resistance to President Trump.

So, Diane is among a group of like-minded leftist activists watching a video they produced.

Thrilled with the first video attempt, audience members excitedly ask if it will be shown during the Chris Hayes show (on MSNBC) and they are reassured that the plan is to buy ads and run it on Fox News Channel, too. As the audience devolves into an argument over which is the most compelling issue for the group to include in its efforts, Diane is asked by Valerie Peyser, said to be a former Obama opposition researcher, to come outside and talk to her. She recruits Diane for her small group of female resisters. Valerie is looking for people to “take the fight to Trump.” Their tactic of resistance is fighting fake news with fake news. Valerie justifies it by saying, “Trump lives by fake news and dies by fake news."

President Trump’s alleged troll farms in multiple cities are the focus of the group. The first target is in Chicago, located in a building housing a day-trading boiler room on Randolph. The first video to air is one using footage of Secretary of Education Betsy De Vos. The message sent by the Trump administration is that small amounts of cyanide are acceptable in school lunches. Ugh. The women joke that they should start “P-Anon,” mimicking the alt-right’s QAnon, to share fake news videos.

Unbeknownst to Diane, the NSA is monitoring her phone calls and texts, and Valerie lands on their radar over a voicemail Diane left for Valerie. In the conversation, Diane uses five target words under NSA guidelines – Trump, die, fake news, resistance, and Pizzagate. One of the monitors calls the use of all five words as being like “domestic terrorism bingo.” As they put Valerie’s name into the system, one man monitoring her says, “Good luck, Valerie Peyser. You just earned yourself a 3-hop warrant.”

This is all to suggest that President Trump is using the NSA against his enemies. Rochelle Max, a Democratic strategist in the group, asks, “Nixon had his enemies list. Do we think Trump doesn’t?”

At one point in this episode, renegade attorney Roland Blum (Michael Sheen) gets under Diane’s skin after she catches him using her office. She talks to him about his friend, President Trump, and says she isn’t worried about Trump’s re-election because “people will rise up.” Sure, says Blum. “Because that’s what people do when the jobless rate is at 3.7%.” Then he delivers some hard truth to her as he says, “Trump wins because he sees life as a battle, not a cause. He uses your strength against you. Liberals never get that.”

And, then reality bites Diane at the end of the episode. Her colleague Jay tracks down Valerie in New York after Diane and the other women become concerned about her absence. Jay’s investigation shows that Valerie’s real last name is Underhill and she’s got a record as a con woman. She has a history of check kiting and identification theft. She preys on wealthy women, like Diane. She was arrested when she went back to New York to get her things. Awkward.

Rather than tell the truth to the rest of the women, Diane reads a pretend text from Valerie at the next meeting reassuring them that Valerie has been found in New York and is fine. Diane used the excuse that Obama called Valerie back to work for him on the west coast. Talk about fake news!

Given all that Americans have been through the last two years with all the fake stories in the news about the Trump administration, it takes some nerve for the lefty writers of this show to co-opt the subject of fake news and use it themselves. It may be interesting to see how they develop the storyline of the NSA surveillance on Diane going forward.