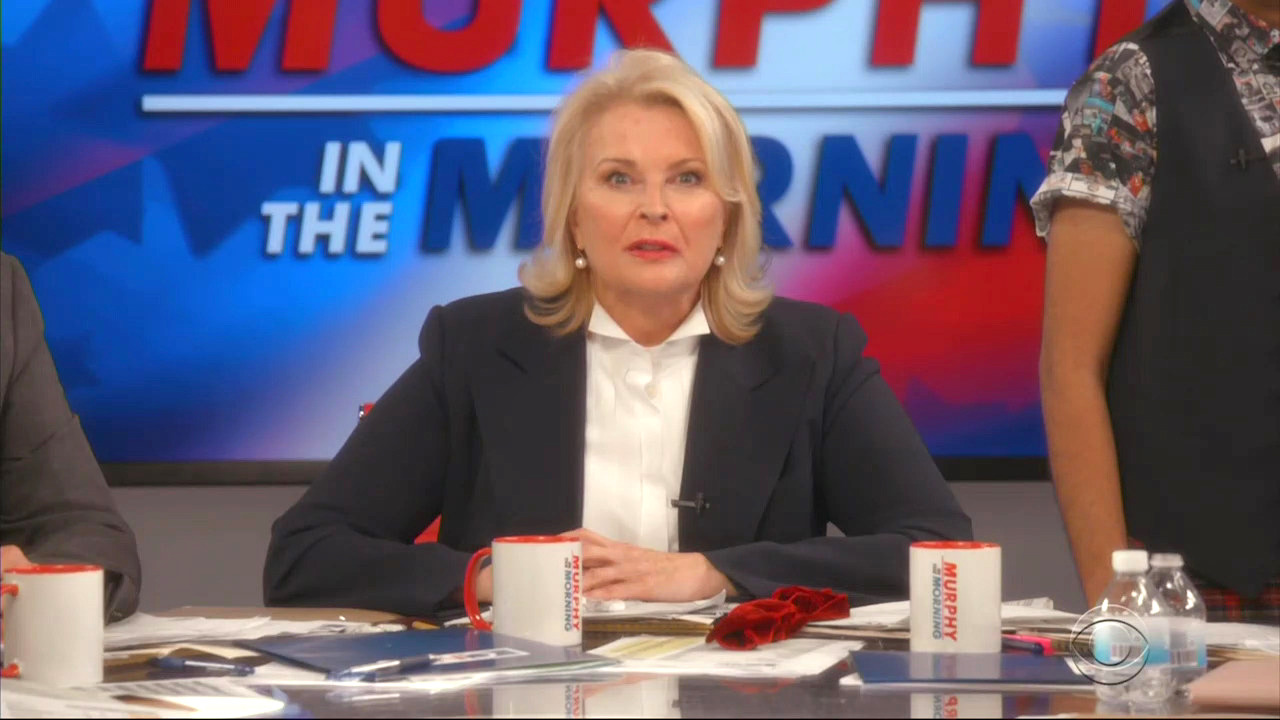 With the midterm elections fast approaching, Hollywood is pulling out all the stops to make sure their get out the vote message is heard. On CBS’s Murphy Brown the usual tropes are brought forward from the long-suffering liberals anchoring the "Murphy in the Morning" show. This show is so leftist that they think the Democrats are "weenies" who won't fight back against Republicans.

The November 1 episode, titled “Results May Vary,” takes place on election day and follows their live news coverage into the night as polls close. Murphy (Candice Bergen) and her son Avery (Jake McDorman) wage a bet as to who will last to the end of the long marathon of news coverage. Murphy, of course, works for CNC (i.e. CNN) and Avery works for CNC’s competition, Wolf News (i.e. Fox News).

Avery is matched up with a Sean Hannity-like character named John Haggerty (Peter Gallagher). Naturally, Haggerty is obnoxious and busy hawking his latest book, Mike Pence: God’s Vice-President. He tells Avery that the president calls him every night for advice and that he is the one “actually running the country.” Sure.

Haggerty is shown spinning innocuous video into a wild conspiracy theory. Then "President Trump" calls into the show and rambles on throughout several segments. Of course, the Wolf anchors besides Avery fawn over him.

Avery: And although Democrats typically don't show up for midterm elections, there is a remarkably high turnout in Pennsylvania, which usually bodes pretty well for left-leaning –

John: What concerns me are these reports of uniformed gangs intimidating voters in Philadelphia, a classic Democrat ploy.

Callie: Amen to that, John.

Avery: Huh. You know, I'm looking at the video, and it appears to be a Boy Scout troop helping the elderly across the street.

John: They may be dressed like Boy Scouts, but come on. Look, that guy's giving the Black Power salute.

Avery: Yeah. No, I think he's just hailing a cab for an older woman. Yeah. Why don't we, uh, put this video up so our viewers can see for themselves.

John: I'm so sorry to interrupt you again, Avery, but it seems like we have a call from a very important person. Good afternoon, Mr. President. What an honor it is to be talking to the leader of the free world on this important day. How are you, sir?

President Trump: I love election days. I won the Electoral College, you know. I got like 306 and she got, like, what, like 223. There was no way to break 270. I heard that on CBS and NBC and ABC. They're all fake news. Did you know that I'm actually polling higher than Abraham Lincoln?

President Trump: I know who you are. Your mother is not a nice lady. And by the way, no collusion.

During the marathon coverage, local watering hole owner Phyllis (Tyne Daly) caters Murphy's newsroom with strong coffee and energy drinks, plus sandwiches. Her assistant, Miguel (Adan Rocha), a "DREAMer," is disappointed to hear Phyllis isn’t bothering to vote. She tells him that politicians are all awful and it isn’t worth her time because the Democrats don't fight. He complains that even though he’s been in America since age two, he doesn’t have the right to vote since he’s here illegally. He uses the usual talking point that he feels as American as everyone else. Well, that may be but he isn’t. He’s here illegally, he's lucky to get anything.

Miguel: I can cover for you if you want to go vote.

Phyllis: Politicians all stink. The Republicans start a knife fight, and the weenie Democrats show up with spatulas. Meanwhile, nothing gets done. Voting doesn't make a difference.

Miguel: It does if your last name is Gonzales.

Miguel:  I've been here since I was 2. I feel like an American in every way except maybe the most important.

Phyllis: You never had the pleasure of lining up at the DMV for seven hours?

Miguel:  I'm talking about voting. You know, DREAMers like me can't vote. You can. So why wouldn't you?

Miguel: Nope. We pay taxes, we serve in the military, but we're not allowed to go into that booth.

Phyllis: You really think you can make me crack, don't ya?

Miguel: Yep. And then I'm gonna get you to give me health insurance. With a dental plan.

Phyllis: Here's a dental plan for you -- stay away from sugar.

Phyllis is convinced to vote, though, after overhearing two young women looking at a cell phone saying that a new challenge has been issued to Roe V. Wade. Well, that’s all it took for bleeding heart Phyllis to grab her coat and head to the polls. Ugh.

The show doesn’t predict victory one way or the other on election night. There is, however, one last nudge to vote because "elections have consequences."

Miles: Guys, guys. Look at the board.

Frank: I did not see that coming.

Murphy: Welcome to the next two years

And, with that, the show ends. We are left hanging because, obviously, the elections haven’t happened yet. Here’s hoping the cast is disappointed with the real-life results next week.