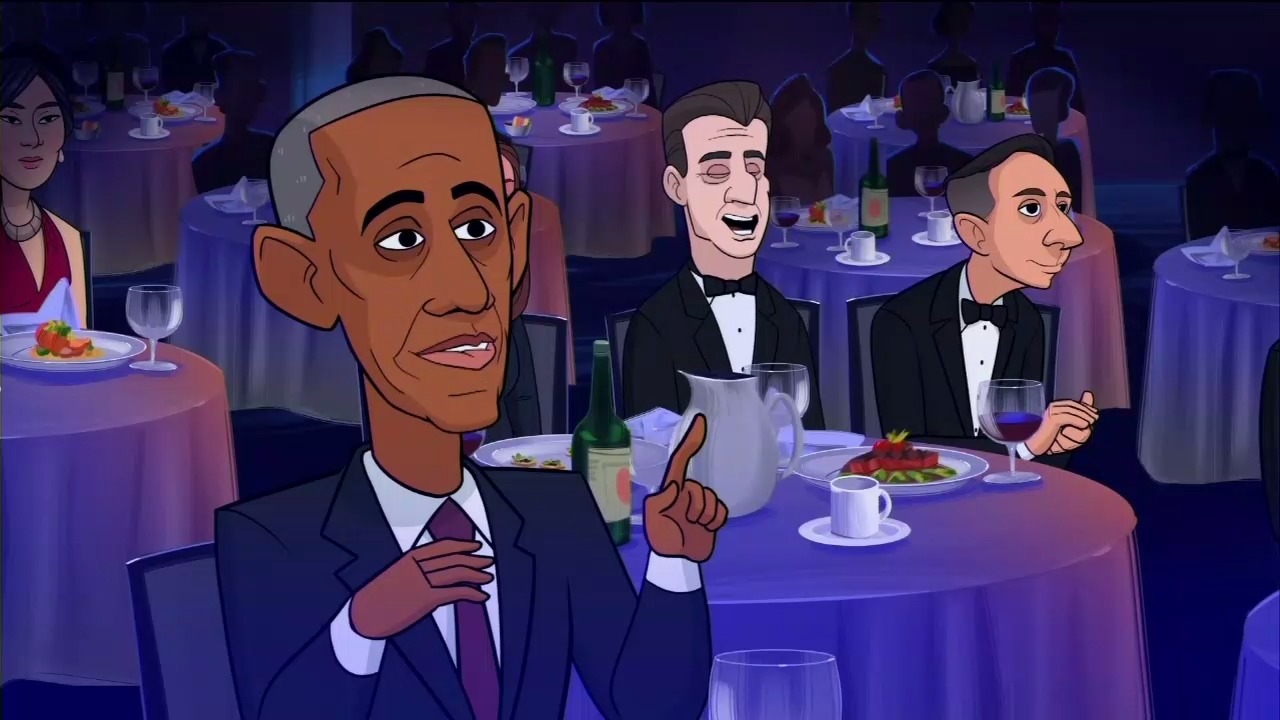 Episode three of Our Cartoon President aired on Showtime February 18. Titled “Rolling Back Obama,” President Trump declares his legacy to be that he tore down the legacy of President Obama. Thank goodness it is only a half hour show because even this Stephen Colbert creation couldn’t seem to think of much of a legacy to tear down.

The show concentrates on Trump’s depression once he realizes there is little left to destroy in the way of Obama’s accomplishments. Told he is jealous of his predecessor, Trump responds, "Why would I be jealous of a guy with exhausting charisma, a distractingly bright smile, and only one voice in his head?" He becomes very depressed and it gets so bad that the staff tries to find a way to cheer him up.

After Trump delivers a speech to a rally appearing unshaven and incoherent, General McMasters pulls out the big weapon - White House Correspondents' Dinner tape of Obama’s insults of Trump as Trump sat there and watched. You may remember this evening was referenced in last week’s episode and given as the sole reason Trump ran for president in 2016 - to clap back at Obama for insulting him so publicly.

Trump decides to try and top Obama’s insulting jokes and do some on Obama. “I want to roast Obama like he roasted me,” he proclaims. He even wants Obama there in the audience so McMasters handles that, too. Obama is in attendance because McMasters “told him Richard Branson would be here.” Lol!

Trump starts out with jokes aimed at Obama and bombs with the audience. Then he goes to a page of "self-depreciating" jokes and the media audience loves it. Even Obama is shown laughing at the end and it's said that Trump "roasted himself far better than Obama ever did."

Trump: Wow, available wherever animals are tortured. That was something? But you know who isn't something? Barack Hussein Obama. I mean, this guy couldn't keep Muslims out of his own family. How could he keep them out of the United States?
Audience: Oh, my god.
Trump: You know the Obamas had a dog named Bo who would often say, "Ruff, ruff." That's a good description of his presidency, "Rough, rough." He also had a dog named Sunny. How much dog can one man eat?
Don, Jr.: Oh! Killing it, real Dad.
Trump: Geez, these jokes are bigly crap. Crap like me?
Jared: Psst! Page two!
Trump: It's hard to figure out what's more ill-fitting -- this suit or me as president. You know, I got to start watching what I eat. I asked my insurance agent where I could be buried. He started listing canyons. Canyons, folks. My kids are great. I mean, they're not too bright, though. The other day, I caught Don Jr. trying to unwrap a battery like a candy. And he's the smart one! But seriously, folks, I got to tell you. Me and Jesus have a lot in common. He lugged around that huge cross. I got to lug around my huge ass. Where's my holiday? So, yeah, I hate myself. Thank you! That's my time.
Obama: Now that's pretty funny.

You didn’t think the liberal audience of the press corps would laugh at jokes about Obama, did you? Or that Our Cartoon President could bring itself to air jokes making fun of Obama? Late night comedians always found it impossible to mock their hero Obama and now are getting so bored of all the thousands of Trump jokes that they miss the Obama days when they didn't have to make jokes about the president.

While the best Trump-hating Colbert and his writers of this show could muster up on Obama’s legacy were rote claims of turning around a bad economy and killing Osama bin Laden (yes, that was a good thing that happened during his presidency!), there was no mention of all the failures like the phony promises about Obamacare and closing GITMO or the executive orders overturned by the Supreme Court. It would be funny how none of that came up if it weren’t so sad.