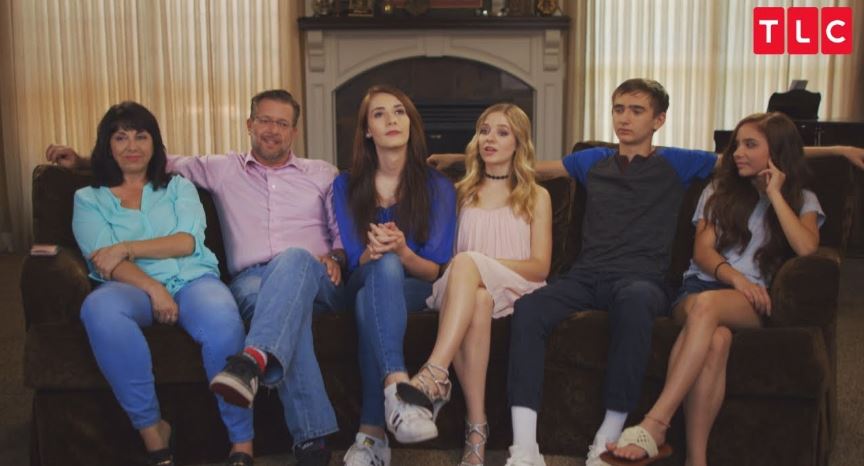 There was a theme going on with Wednesday night programming on TLC this week: it was all about transgender teenagers.

The hour long special Growing Up Evancho premiered August 9 following I Am Jazz and it, too, features a teenage boy who wants to live as a girl. It is a show about celebrity teen Jackie Evancho, who gained celebrity status from her singing performance on America’s Got Talent, and her older "sister" who goes by Juliet and is transgender. The family hopes this special will launch them into their own full series.

The Evanchos are a family of six who live in Richland, Pennsylvania. Juliet is the oldest of the siblings, born a boy named Jacob. Juliet is a transgender activist, most recently known for winning a lawsuit against her school district over the bathroom issue. Jackie became a child star from her debut on America’s Got Talent and continues to perform.

You may remember that Jackie performed at the Trump Inauguration and liberals were outraged. The family said, "The way we see it, it's not about singing for Trump or for Obama. It's about signing for your country. It's an honor."

After receiving criticism for performing at the presidential inauguration from anti-Trumpers, Jackie did go on to criticize some of the president’s proposed transgender policies on Twitter. She says she is not anti-Trump but wants to speak up for her sister. The tweets brought criticism from her conservative fans. Her conflict in supporting the family with her career and also supporting her sister is mentioned more than once. Jackie’s parents try to shelter her from most of the hate mail she receives.

Jackie’s career is the family business. Her father, Mike, gave up his own business when her career took off in order to guide her career. Jackie is now 17 years old and Juliet is 19. Jackie is very open in talking about the sibling competition and the jealousy that Juliet has about Jackie’s career success. Juliet, however, is only too happy to use her sister’s fame to promote her advocacy of transgender rights.

Along the way, Pennsylvania Senator Bob Casey, a Democrat, invites Jackie and Juliet to come talk to him about transgender issues. The two sisters hope that a law can be written to give transgenders "the same rights that everyone else has." Casey points out that with Republicans in charge of Congress and a Republican president, a law won’t be easy. Senator Casey never actually says the words “Republican” or “Trump,” though.

Sen. Casey: How are you?

Juliet: Good, how are you?

Casey. Nice to meet you. How are you?

Jackie: Thank you. How are you?

Casey: Good, how are you?

Jackie: Nice to meet you.

Casey: Nice to meet you. Have a seat. Thanks for coming in.

Casey: This has been an awfully difficult time, I know, for both of you. But there are not many people your age that would engage with the president on an important issue, so you've been a great example.

Casey: Juliet, tell me about your own story and tell me what you've lived through.

Juliet: Ever since I was little, I always felt really different. And it was really hard for a really long time. Some of the stuff that I've gone through has been very hard. When I first started going to school as myself, I was able to use the girls' bathroom and there were no problems whatsoever. It was until March of my junior year that everyone started having problems with it. I lost a lot of friends because they didn't know how to approach the situation. Our school said if I don't use the unisex bathroom, I'm using the boys' bathroom. There was a girls' bathroom right outside one of my, but I had classes to walk up the stairs and down the hallway to go to the unisex bathroom. And I hated it. It made me feel so different. Like, why does this have to happen? I've had stuff thrown at me, trash.

Juliet: Yeah, lots of words. I've been called a [bleep], a [bleep], a pussy. Everything that had to do with school was horrible.

Casey: Well, it takes courage to do what you've done, and especially at your age. That's not easy to do.

Jackie: It's kind of one of those things where I feel like maybe a law should be passed to ensure the safety and protection of the LGBT community.

Casey: I think that's probably more difficult, mostly because of the makeup of the Congress right now. And the executive branch is the same party.

Juliet: What would be a good way to kind of keep the ball rolling in sort of a sense of enacting change and making things more apparent to everyone in Washington?

Casey: I think your personal witness on this is critically important. And by the way, because of the way you've engaged, people in Washington are hearing you. So, you should be very proud of what you've done.

Jackie: Thank you. This was definitely the right thing to do, and I have no regrets. Listening to what Juliet's gone through, just being reminded of it, if anything, it just inspires me to keep pushing harder.

Juliet: We just want to make sure that everyone's treated as human beings.

Juliet: I do know that a lot of transgenders don't have the privilege of having support like I do. And it breaks my heart because I wish I could help them and let them know that they're not alone.

Jackie: Having the opportunity to take the meeting with the senator means a lot to me. And I'm just glad that I got to support my sister.

I won’t be surprised if this family gets their reality show on TLC. There was a brief tie-in with the lead-in show, I Am Jazz, as Jazz and Juliet have a conversation on Skype about their difficulties as transgender "girls." They both use their own bathroom stories to commiserate together.

It just seems sad to me that 17-year-old Jackie has to feel the stress of supporting a family of six cashing in on her sister’s sexuality.