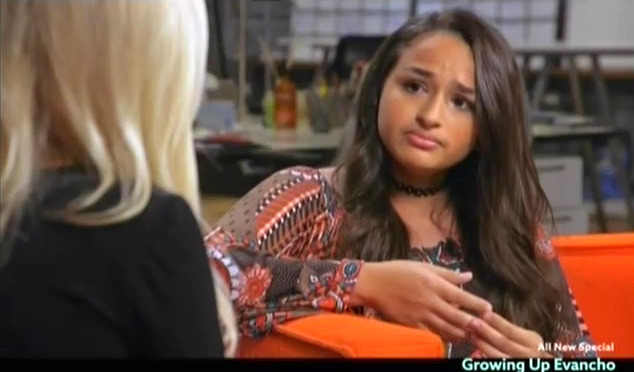 In the August 9 episode of TLC’s I Am Jazz, an invitation to interview Jazz and the co-author of "her" book, Jessica, is accepted by Tomi Lahren (from back when she was still with TheBlaze.) The episode’s title, “In the Line of Fire” implies a battle ensues but viewers expecting fireworks between the outspoken conservative host and the transgender teenager will be sorely disappointed.

Much is made of Lahren’s opposition to transgender bathroom laws and names she has used in past arguments. Jazz and her mother, Jeanette, along with dad, Mike, expect Tomi to go full-on aggressive against Jazz’s opinions. Jazz and Jessica run through some possible scenarios before the taping day arrives and Jessica is particularly keen to bring up the bathroom issue. Jessica and Jeanette would really like it if Jazz would call out Tomi for the hate and intolerance they think she exhibits.

Jazz looks at this interview as an opportunity to educate Tomi’s viewers because she thinks her audience probably hasn’t been exposed to transgendered people. But really it's Jazz who hasn't been exposed to the opposite side. She admits, "It's my one and only chance to reach an audience that I usually can't access -- people who aren't accepting of the transgender community."

The interview turned out to be a dud. While Jazz and her team are busy bashing conservatives for not falling in line with the whole transgender agenda without questioning it, Tomi turned out to be completely polite and led a civil and respectful conversation. She wasn’t some unhinged monster but a regular human being, after all.

Tomi: I'm excited to have both of you ladies here. I think that we have misconceptions about each other. I think we don't have conversations with each other, if we perceive we're so different, but at the end of the day, we're human beings, and we all want to be loved, and we all want to belong. But for me, my biggest question for you is, what does people like me, people on the right, what do we get wrong about your lifestyle or your way of life?

Jazz: Okay, well, I think one of the major misconceptions is that a lot of you guys think it's a choice or that one day, I woke up and decided I wanted to be a girl, and that's not true. I was born this way. As soon as I had verbal expression, I was stating that I was a girl.

Tomi: I get it. If you feel that you're a woman, I get it. But why do you have to surgically change yourself?

Jazz: So, personally, I just feel uncomfortable in my body, the same way you would feel uncomfortable in your body if you had the wrong genitals, and for me, I completely have a girl mind and brain and express myself as a woman, and when my body doesn't match that, I feel like I'm trapped. I'm trapped in the wrong skin. You know, if the surgery, operation is going to make me happy, then that's all that matters.

Tomi: Well, now, I will say this. I have to have an honest moment with myself and say, "Listen, I sit here as a conservative, as a Republican," and I say, "Limited government." I say, "Do as you want." I just don't want to pay for it. I will say that.

Jessica: That feeds right into how strongly I feel about the bathroom bills. I think we have common ground in the sense that you and I don't want a government overreach. Government agents standing outside bathrooms, looking at people's birth certificates or asking for a physical inspection feels to me very intrusive and the opposite of what I would assume that conservatives would want. I really wanted to hold her accountable for some of the language she's used 'cause I'm pretty sure you described transgender people as drag queens or sexual predators trying to get closer to their victims.

Tomi: You know, and I want to talk about that because I feel as though there are individuals, sick individuals, that are going to take advantage of someone, and then they're going to use the guise as being transgender to do it.

Jessica: It's just mythology. The 17 states that have inclusive laws around their bathrooms have zero incidents of any assault, so the fact is there isn't a basis for this fear.

[It's not a myth - women and girls are being victimized in bathrooms and changing rooms by men dressing or "identifying" as women.]

Tomi: I'm still someone that says, "I think it opens up a can of worms."

Jessica: But the reality is Jazz is the most unsafe person in a restroom.

Tomi: Were people calling you a pervert?

Tomi: You weren't, but when they saw you going into the women's restroom, is that the feelings that they got?

Jazz: I was a second grader who looked very innocent with pigtails. I do not think I was a pervert, at all.

Jazz: This isn't about sexual predators. We're discussing equal rights, and there is no right and wrong, and I don't know how you could disagree with that.

Tomi: I know you're not old enough to vote yet. But how do you feel about the next four years?

Jazz: You know, I don't want to live my life in fear of being judged by someone who doesn't even understand the content of my character, and if I couldn't be my authentic self, like I am today, and, you know, expressing myself as a woman and being proud of who I am, then I probably wouldn't even be here.

Jazz: While I don't know if Tomi came full circle, I know that some of her audience members are going to watch this and be like, "You know what? Transgender people do deserve equal treatment and acceptance in society." I feel like I toughened up my skin a little bit and had to muster up a little bit of courage in order to face someone like Tomi who I knew was going to have an opposing opinion. Okay. I feel like, off camera, Tomi is probably like, "Oh, I'm wrong."-But...

Jeanette: -I mean, she was very different than what we've seen.

Jessica: It's very hard to be that confrontational when you're face-to-face with a kid. I did think that Tomi went home and still felt that "Traditionally-minded people," as she called them, are entitled to demand restrooms the way they used to be. I don't think we changed her mind on that issue. This could have gone a hundred different ways. Maybe, we could have been a little more confrontational. There were certain things that we wanted to call her out for saying, but in the moment, it felt that here was Tomi, extending an olive branch to us, and why kick the bear?

Jeanette: But you know what? Her viewers are watching this and they're listening and they're hearing from Jazz, who they would never have heard from, and right there is a win. Even if it was, like, one person out there that's like, "You know what? I get it, and I accept trans people now. I wouldn't have in the past," that's a win.

Quite the let-down if you are expecting a fight, right? Funny how liberals are always so surprised that conservatives are not fire-breathing monsters in real life. And, as usual, the assumption is conservatives just need to be educated and, surely, they will fall into line with the transgender agenda.

Sadly, this show’s family still doesn’t understand that a difference of opinion or beliefs isn’t the same as hate. They could use a little education themselves.