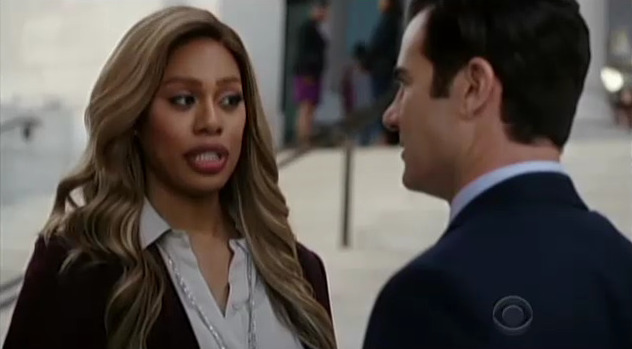 For the first time to my knowledge, a network television show has brought in a sexual relationship between a transgender woman and a man. Real life transgender actress Laverne Cox plays transgender attorney Cameron Wirth in CBS’s legal drama Doubt and in the July 22 episode, titled “Top Dog/Underdog,” she agrees to sex with her boyfriend, a District Attorney, for the first time.

Somehow the drama moves Cameron and boyfriend Peter (Ben Lawson) ahead so that they have now had six dates, though previous episodes haven’t shown that. There was some flirtation earlier but it hadn’t gone anywhere until this episode.

Cameron is pre-occupied and distracted by a parole case and has put her relationship with Peter on the back burner. He shows up on the steps of the courthouse to let her know he is ready for more.

Peter: Thanks for meeting me.

Cameron: You asked, I came. What's up?

Peter: Last night, after dinner, I tried to go downtown. That's not a metaphor. I-I literally tried to go home with you, and you live downtown.

Cameron: I know what you meant.

Peter: And you said you had to work on your statement. Now, since then, I've been wondering, maybe six dates was enough for her to realize that she's not interested in my coin collection. That is a metaphor, by the way.

Cameron: No, I told you what I'm dealing with. It's big. I'm just distracted.

Peter: Cam, I get it. The parole hearing, it's important. I just wanted you to know that with everything on your mind right now, I want to be the guy you tell.

Peter: Are we ever gonna have sex?

Peter: See, normally, six dates in, I can get a feeling, you know, a sense. And the sense I'm getting here is that maybe it's not happening.

Cameron: I'm in the middle of a case.

Peter: Cam, if you're not into it, you can tell me, but you got to tell me because I am really into it.

Okay, then. Is it normal for a District Attorney to loudly ask his girlfriend if they are “ever gonna have sex?” with other people coming and going? It seemed a bit obnoxious to me.

So, being the thoughtful guy he is, he shows up later in the episode at Cameron’s door to bring her some food after a long day at a parole hearing. Mission accomplished – it happened. Peter got sex and we got the first transgender sex scene on CBS.

Cameron: Peter. What are you doing here?

Peter: Well, I know there's not a ton of restaurants near the prison, so I figured the least I could do is bring you dinner. And ginger ale. Also diet ginger ale.

Cameron: Where are you going?

Cameron: You drove an hour and a half to bring me food, and now you're driving back?

Peter: Because that's what you do for someone you've been on six dates with, who's doing a parole hearing.

Cameron: Wait. I've never been on six dates with someone who's nice and funny and smart and... I don't know how to be.

Peter: I don't know how to be either.

Cameron: I might freak out. I might sleep with you and then hate you. And then I'll have to see you in court, and it'll be really awkward.

Cameron: Carolyn has cancer, and I can't tell Sadie.

Cameron: I feel like I'm lying every time I look at Sadie and Isaiah.

Peter: Why are you telling me?

Cameron: I don't know. I know I probably shouldn't, but I didn't want to know it alone. Plus, you have a nice face and... I just want to try to trust you. You wanted to know when we were gonna have sex? I think right now.

Ah, yes. The old “you have a nice face and so I’ll sleep with you" routine.

This is Hollywood continuing to force regular America into believing sexuality is fluid and gender change is normal, no matter if it includes surgical procedures to make it so, as in the case of transgenders.

Doubt was canceled after airing only two episodes back in February but CBS is now running the rest of the episodes in primetime at 8pm eastern on Saturday nights. I can only imagine the awkwardness in the homes of young children as their parents scramble to change the channel during these scenes.