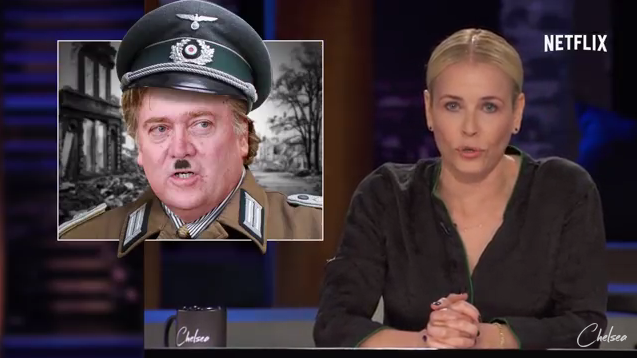 The April 21 episode of Netflix’s Chelsea titled “Women That Are Strong Are Fun” brought another Trump bash-a-thon which included a trip to Paris to bash Trump with some French voters. But Chelsea Handler seemed especially deranged about Trump advisor Steve Bannon.

Trump advisor Bannon took it on the chin again when Chelsea referred to him as a DUFF – Designated Ugly Fat Friend – and a Nazi. She had a graphic of Press Secretary Sean Spicer as a Nazi, as well. Clips of Trump campaign rallies were played to show Trump making remarks that leftists consider a call for violence, though Trump claimed to be a non-violent person. Then the history of Breitbart News was presented by two bit players on the show, Jiffy and Dan. An interesting moment happened as the insults flew, Chelsea was unaware that founder Andrew Breitbart is deceased. I thought Chelsea was supposed to be so smart and politically informed. Heh, not so much.

After a Trump reference–free (shocker) interview with actress Charlize Theron, another fake commercial aired. This one was for a new show on Fox News called ICE’D – yeah, you know where I’m going here. It's a hidden camera show where ICE agents round up Hispanic people at a taco stand, a playground, etc. while they proclaim they are Americans. #Lame

Introducing the next segment, Chelsea said, “France has its own Lady Trump running for president.” She interviewed Nicole Bacharan, a political historian and analyst to explain the political system and how elections work in France. Of National Front candidate Marine La Pen, Bacharan said, “Compared to Donald Trump, she seems rational.” During a discussion in a Paris restaurant, Chelsea used the word “scary” often, as did the leftists talking to her. One young man seemed to be a La Pen supporter and Chelsea asked if he is gay. Answering that yes, he is, she proceeded to tell him that he was on “the wrong team” as a conservative voter. How arrogant and condescending of her.

Poor Chelsea. She is so unhinged over the presidential election result that she can’t do anything but talk about Trump and Bannon now. She said, “I do like Republicans when they are honest. I just don’t like lying and I feel like I’m being lied to every day by every single person in that administration.”