Danielle Jackson, a stylist at Carlotta’s (Queen Latifah) salon and the mother of two young children, was killed by Atlanta police during a traffic stop when the arresting officer thought she was reaching for a gun. Derek tells the mourners at the wake afterwards that it is time for them all to take it to the streets. “All you see is black people getting killed.” He uses a quote from Martin Luther King, Jr. to justify his idea, saying, “A riot is the language of the unheard.” Yeah, we see where this is going.

Carlotta (Queen Latifah) explains to Simone (Brittany O’Grady) that she remembers playing a club date in Los Angeles in the midst of the Watts rioting, back in the day when she was a singer with Star and Simone’s mother, and doesn’t want the girls around a demonstration. She presciently says they always start out peacefully and end in violence. But Pastor Bobby (Tyrese Gibson) convinces Carlotta that going to the demonstration and supporting the girls as they sing is the right thing to do.

The rally is held and Derek asks his girlfriend, Alexandra (Ryan Destiny), to sing to lift the spirits of the protesters. She insists on having the other girls in the group sing with her. After the performance, the Atlanta Police Chief makes a televised statement and announces that the investigation is over and that no charges will be made against the arresting officer. He was suspended, with pay. This is not what the crowd wanted to hear. 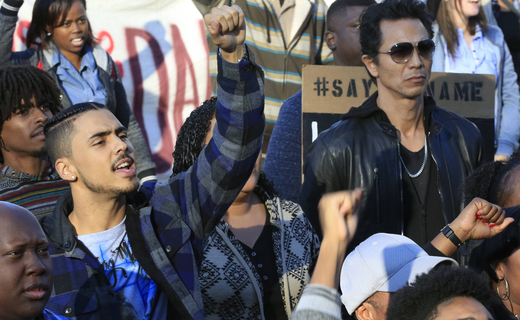 Derek leads the group in chanting, “No justice, no peace, no crooked police.” What could go wrong? As the police stand guard, the usual pushing and shoving begins. A SUV pulls up and dumps out a police officer who is handcuffed. Derek claims it is agitators who have invaded his protest and sees the officer being beaten. He goes over to break it up and offer the officer help when other police officers gather around and arrest Derek. As they take him away, he says they have the wrong man and “This isn’t Black Lives Matter!” Actually, that is EXACTLY Black Lives Matter, as evidenced by the rioting and violence across the country the last few years at their events.

The final scene shows Alexandra driving to get Derek out of jail. She is pulled over by the police – naturally. When asked for registration and proof of insurance, she cops an attitude and says she doesn’t have it with her. When she is asked to step out of the car she continues with the attitude and asks why. She tells the officer she knows her rights as he roughly throws her up against her car. See what they did? It was made to look like the cop was mistreating Alexandra even though she was less than cooperative.

It is hard to feel sympathy toward an unsympathetic character. She ends up proving that provoking police officers is not the way to handle a traffic stop. She was driving without the proper documents and then copped an attitude when the officer investigated.

This episode is a good example that if the police don’t produce the results wanted by the chanting BLM mobs, the result is more violence. I don’t think that is what Dr. King had in mind.