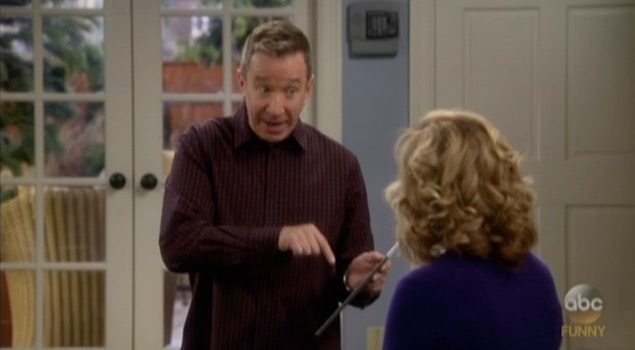 On Friday night’s episode of ABC’s Last Man Standing, Mike Baxter (Tim Allen) has met the enemy of free speech on college campuses, thanks to liberal professors, and that enemy is known as "micro-aggressions." Micro-aggressions are the words no longer allowed on campus because they may offend someone. Today’s special snowflake college students evidently will melt into a puddle if faced with an alternate opinion than what is spoon-fed to them by professors with liberal, politically correct agendas.

In the episode “Precious Snowflake,” Mike is asked by his daughter, Mandy (Molly Ephraim) to speak at her business school’s graduation. She isn’t graduating yet but is on the committee to find a speaker for the ceremony – for extra credit towards her own graduation. Mandy breaks it to him that politically incorrect speeches are not allowed on college campuses these days. His speech has to be approved by the liberal facility committee, too, which, of course, Mike finds to be ridiculous.

Mandy: Um...do you want me to give you some notes before you send it in?

Mandy: The faculty committee needs to approve it after they check for micro-aggressions.

Mandy: No. They're objectionable words or phrases. For instance, "Midget warriors."

Mike:  I know what micro-aggressions are. It's the latest liberal attack at free speech. And a lot of fun if you do them right.

Mandy: The university has a list of stuff they don't allow speakers to say. You know, to protect the students.

Mike: From what, ideas?

Mandy: It's just the way that my school does things, dad. Please. My grade is riding on this.

Mike: Fine! All right. Just pretend like you introduced me to thunderous applause.

Mike: Some lady faints in the front row. "Ladies and gentlemen --"

Mandy: No, uh, you can't say "Ladies and gentlemen," because it excludes those who don't identify as either.

Mike: Hmm. But those are the only two choices.

Mandy: No, not anymore. You just have to keep it gender-neutral, okay? Please continue.

Mike:  "Hey, everybody." "America is the land of opportunity. I stand before you as --"

Mandy: Stop! Okay, by saying that America's the land of opportunity, you are implying that everyone has the same opportunities.

Mike: I'm not implying it. I'm saying it. If you live here and you work hard, you can succeed. That's how this works.

Mandy: Uh...yeah, that one's on here, too. It hurts the feelings of those who work hard and don't succeed.

Mike: Give me that. Where's the list of stuff that doesn't hurt people's feelings? That's got to be a short one.

Mandy: You have no idea how seriously my school takes this stuff, dad. And remember the greater good here. You're helping me scam my way to passing ethics.

Mike: This list is insane. If I go by these rules, I'll be going against everything I believe in.

Mike ignores Mandy's advice and writes the speech to his own liking that includes everything the university told him not to say. He decides to run it by his wife, Vanessa (Nancy Travis), but she is way too concerned about the thought police for Mike’s taste.

Mike: Hey babe. Got a sec? I want to run the rewrite of my speech by you.

Vanessa: Oh, yeah, I can't wait to hear what the new P.C. Mike Baxter has to say.

Mike: Yeah. [ Laughs ] Well, sounds a lot like the old Mike Baxter, but drunk in a locker room. But I'll tell you, Mandy's list was a good blueprint.

Vanessa: You mean of what not to say.

Mike: Oh, no, I got them all in there. Sit. All right, uh, okay. "Good afternoon ladies and gentlemen -- and all of you on the fence."

Mike: "To quote future Nobel Prize winner Lee Greenwood, 'I'm proud to be an American.' Not just because I have the right to speak my mind or carry an awesome gun, but because it's the land of opportunity. Some whiny babies might not think so, but in America, if you work hard, anyone can be successful. Anyone. Any.one. Any one." That goes on and on. I keep doing it.

Vanessa: All right, you know what? Y-you cannot give that speech. You cannot -- can not. It'll cause Mandy a lot of trouble.

Mike: With the thought police, who have their panties in a bunch? And that's in there. Got that in.

Vanessa: The thought police are never gonna approve that speech.

Mike:  You know who else wouldn't approve the speech they want me to give? Me. And God, who I'm also not allowed to mention, but I do.

Vanessa: Well, for the love of God, think about this before you send it in.

Mike:  I think the problem is we're thinking too much about this. Time for action.

In the end, Mike doesn’t deliver the speech. Instead, Mandy introduces a real American small business success story as the speaker – an immigrant from Pakistan her father introduced her to as an example of the American Dream – but gives her own thoughts to the audience as she does so – she explains that her father was never afraid to give her his opinions and that people should be free to tell their own stories. Maybe there is some hope for these snowflakes after all.