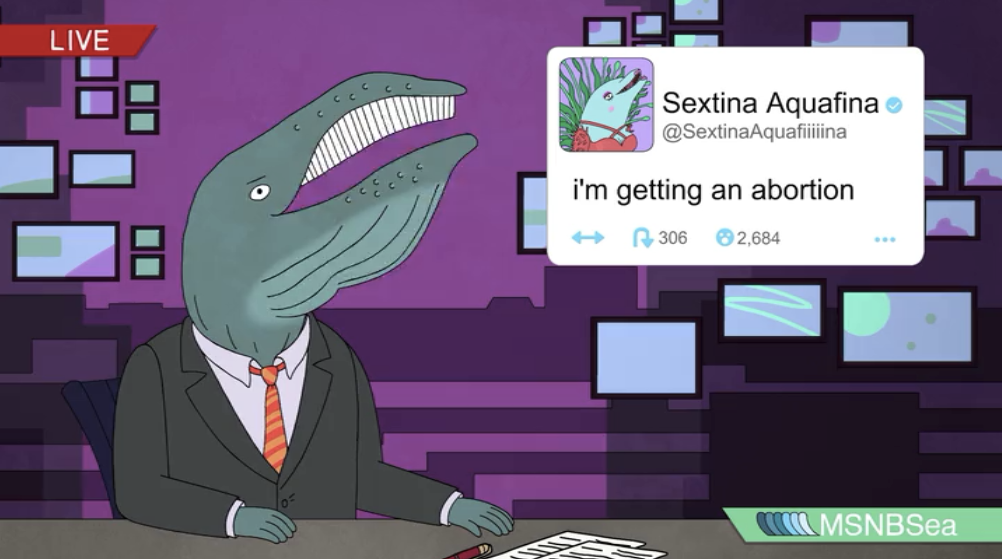 The third season of Netflix’s BoJack Horseman – a cartoon about a beloved sitcom horse from the 1990’s and his life twenty years later – is out and the usual liberal issues are quickly worked into the dark animated series’ episodes.

For example, Episode 2, “The BoJack Horseman Show,” shows BoJack fundraising for 2008 Democrat presidential candidate John Edwards and Episode 5, “Love And/Or Marriage,” highlights a lesbian wedding rehearsal dinner. While the Edwards political reference and gay marriage issues were shown in passing, abortion was the focus of the entirety of Episode 6, “Brrap Brrap Pew Pew.”

Diane, a human (voice of Alison Brie) and her husband, Mr. Peanutbutter, a Golden Retriever (voice of Paul F. Tompkins) decide that she will get an abortion. Diane, while talking about this decision, is distracted as she tweets for her client, teen singer Sextina Aquafina, a dolphin (voice of Aisha Tyler), and accidentally has Sextina tweeting that SHE is going to have an abortion.

A PR nightmare turns into a golden opportunity when tweets of support come in from Taylor Swift calling her “Brave,” Nicki Minaj tweeting "a face with heart eyes," and BuzzFeed posting an article "Top 15 Celebrities Who Should Have Had Abortions Like Sextina." OF COURSE liberal pop culture would celebrate the killing of an unborn child! Deciding to be “the face of the pro-choice movement,” Sextina (who isn’t even pregnant) goes along with the lie.

Diane brings Sextina along to her appointment at “Planned Parrothood,” where pro-life protesters are mocked, as are the informed consent laws pro-aborts say are anti-science and shame women. The abortionist tells her, “By law I have to tell you that at one month your puppies have a favorite color and that color may be blue. … Also, before your procedure, you’ll have to watch 20 hours of cute puppy videos as Sarah McLachlan’s ‘I Will Remember You’ plays softly.” 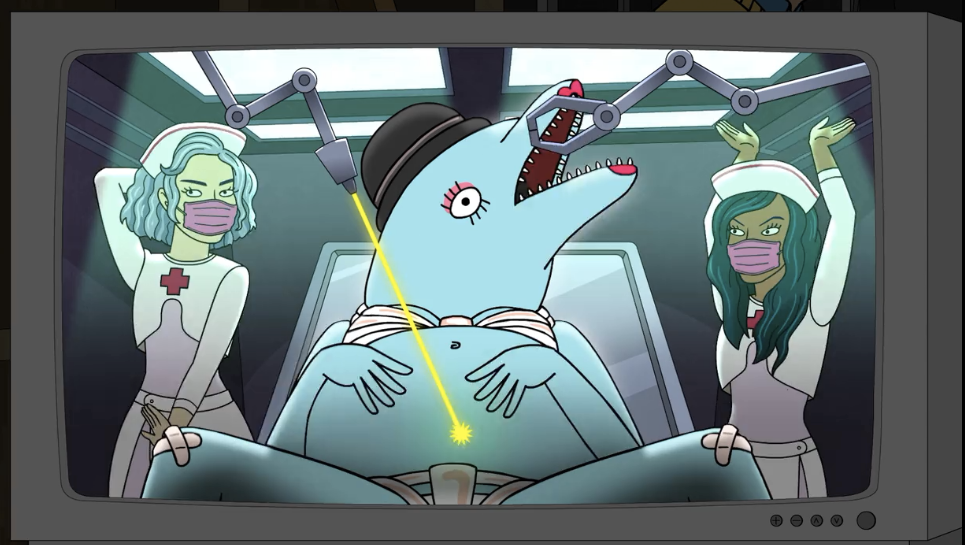 After the music video premiere, Tom Jumbo-Grumbo (voice of Keith Olbermann), a blue whale news anchor on “MSNBSea,” brings in “a diverse panel of white men in bow ties to talk about abortion.” The man billed as an “actual doctor” echoes Todd Akin in saying, “I heard a theory that if a woman really has an unwanted pregnancy the body has a way to break the fetus down into gas particles and then she can just fart it out.” He says he thinks he heard it from the Bible.

After the success of the video, Sextina cooks up a plan to have an abortion on live television. The abortion pay-per-view idea is met with rave reviews from Sextina’s publicist Princess Carolyn, a cat (voice of Amy Sedaris), but Diane isn’t so sure. Diane tries to talk Sextina out of the farce before she films the show. She says the pay-per-view event is disrespectful to those who have abortions, but she’s brushed off – “It’s just show business.”

Diane has the abortion and says she feels “shitty,” but is quick to clarify she only feels bad physically, not about her decision. She starts to explain her reasons for the abortion but Princess Carolyn cuts her off, saying pointedly, “Diane, you don't need to explain anything to anyone.” See? Abortion is “NBD.” Abortion on demand and without apology!

An ironic twist comes at the end of this episode – Sextina announces she is really pregnant and wants to have the baby. Diane and Princess Carolyn concoct a story so that Sextina won’t receive bad publicity over her decision to keep the baby – pregnancy "might be a little confusing to my fans." Yes, a pro-life message would be career suicide. Sextina will leave town and come back after the baby is born and her publicity team will say she adopted a baby.

Ugh. The writers of this crazy, dark show are really a mixed-up bunch. 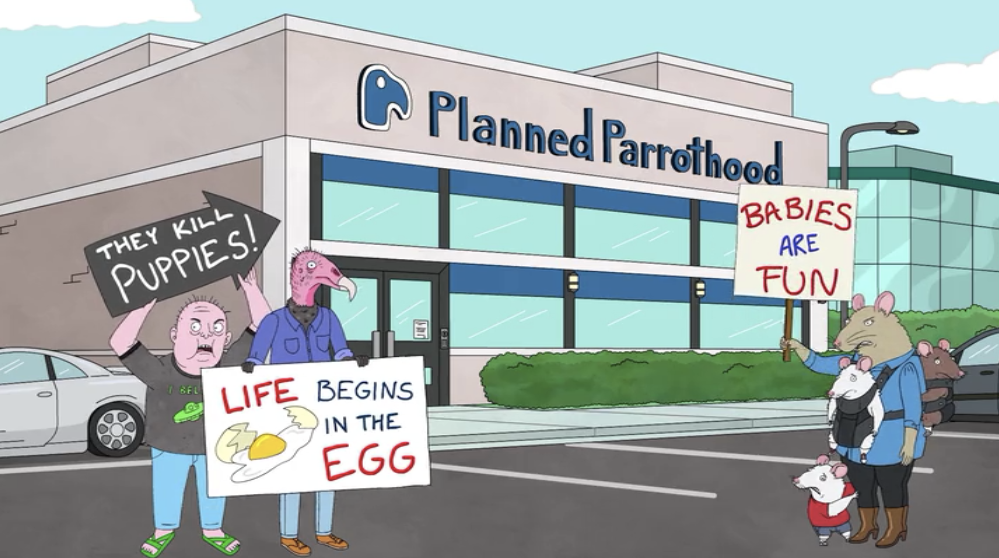