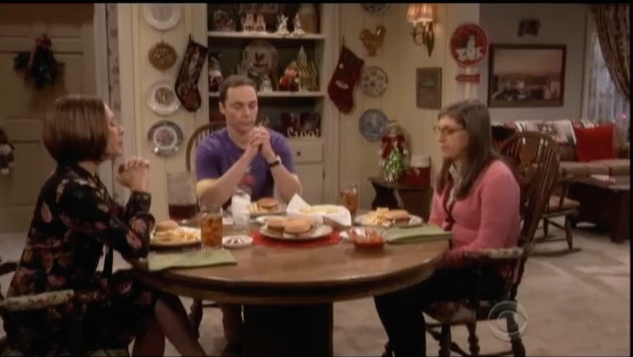 Christianity is once again the butt of the joke on CBS’s The Big Bang Theory – this time mocking prayer and Noah’s ark.

On Thursday’s episode, “The Holiday Summation,” Sheldon (Jim Parsons) and Amy (Mayim Bialik) spend time in Texas with his super-religious mother, Mary (Laurie Metcalf). The purpose of their visit is to tell of their living together, out of wedlock.

During the meal, Mary blesses the food, only to be met with sarcasm by her son. And, of course, they portray Mary as a boring old church lady who hates to stray from tradition.

Mary: Thank you, God, for the food we are about to receive and for the nourishment of our bodies and bless the hands that prepared it. Amen.
Sheldon: Given that your hands prepared it, isn't that a little self-serving?
Mary: You start changing the words to the prayers, next thing you know, you're in a church with a guitar.
Amy: Thank you for cooking, it looks delicious.
Mary: Oh, it's my pleasure. MM. I'm so glad y'all could make it. So, tell me, what's going on back home?
Amy: Well, uh, Howard and Bernadette had their baby.
Mary: Oh, that's wonderful! Now, have they decided to raise it Jewish or regular?
Sheldon: Welcome to Texas.

Bashing Texans because they’re conservative and implying they're anti-Semitic? That’s ok, CBS, you probably don’t have many viewers left there anyway.

Upon revealing they're “living together in sin,” as Sheldon puts it, Mary is fine with it, much to his surprise. She states Sheldon “had memorized over a thousand different kinds of trains, and I never imagined a woman getting aboard any of them.” So apparently sin is ok because she was afraid her son would be alone for the rest of his life.

On their drive home, Sheldon bashes his mother because the theory of evolution has been around since 1859, and “she still believes in Noah and his amazing zoo boat.”

Wow. Seems like lately all we do is expose shows slamming Christianity. At this point, the writers just seem lazy, recycling the same punch lines over and over again. Of course, they wouldn't dare mock other beliefs such as Islam. They know they wouldn't have a prayer.