Pro-abortionists are using tropical fruits to “demystify and destigmatize” abortions. Vice writer Marie Solis bragged that she “learned how to do an abortion on a papaya” according to an article published on July 24. Two weeks ago, they were using watermelons. Maybe next week they’ll cut into a mango and make punch. 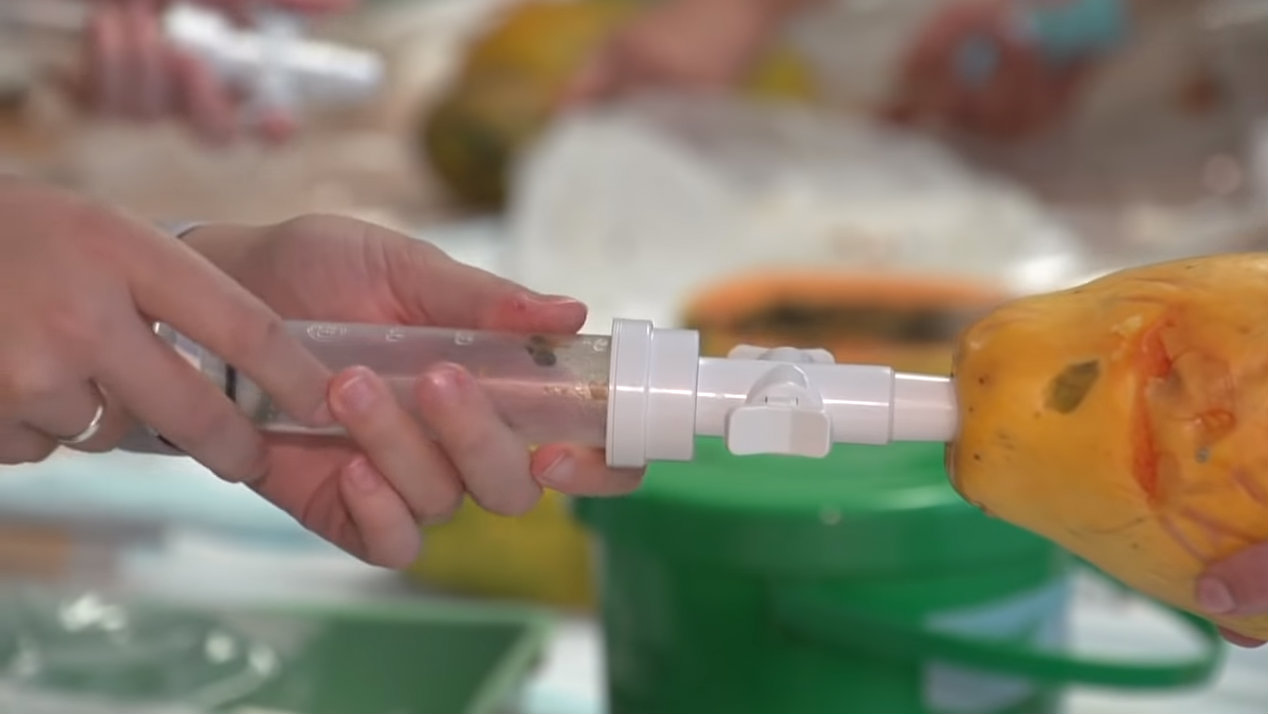 Zoey Thill, a New York City-based abortion provider, gave her abortion demonstration to a dozen people in Verso Books’ Brooklyn office. Thill used a large fist-sized papaya to represent a 10-week-old preborn baby. She displayed the surgical instruments used for an abortion, one of which was a tenaculum -- medical forceps with sharp-pointed hooks that are inserted to clasp the patient’s cervix.

Once Thill finished explaining the anatomy of the uterus, she proceeded to perform the “abortion:”

When the papaya was fully “dilated,” she placed a plastic tube called a cannula inside and attached it to a manual vacuum aspirator, a plastic, syringe-like device, sucking out the inner contents of the papaya: what, for our purposes, was the pregnancy.

The papaya seeds that filled the plastic tube, which Solis called "the pregnancy," represented the bodily remains of an aborted baby. Admiring her work, Thill said, “This is a really fucking good one.”

After Solis successfully performed her own the faux abortion, she was “surprised and pleased to see that [her] amateur skills could produce the same result.” Others around her had similar reactions, reveling in their new-found knowledge. Watching her students rejoice, Thill commented, “It’s even more satisfying when it’s a real abortion.”

Solis reported, "She wondered if participants might capture some of the buoyant energy they felt while extracting seeds from fruits and use it to undo some of the seriousness and reverence we’ve placed around the procedure."

These euphemistic demonstrations are far from new. The idea of papaya abortion demonstrations spawned from an academic paper published in 2005 that found that the fruit could serve as a “simulation model” for first-trimester abortions. According to Solis, the Reproductive Health Access Project (RHAP) began offering papaya workshops to non-clinical students five years ago, and have done hundreds since.

To meet rising demand, many independent abortion providers, including Thill, have taken it upon themselves to organize their own papaya workshops. With Roe v. Wade possibly at risk, Thill expressed her hope to become part of an underground network of secret abortion providers. Other abortion activists, such as Lizz Winstead, have opted to use other fruits (e.g. the aforementioned watermelons).

Thill asserted that the goal of these workshops is “to help combat fear, misinformation, and stigma.” RHAP’s executive director Lisa Maldonado stated, “The papaya workshop helps us do that in a really concrete way.” Abortion activist Nikki Blazek said the workshop helped affirm “her belief that abortion is an indisputably good thing.”

Sure, it's easy to support abortion when it's on an inanimate object. Unfortunately, the result of abortion isn't the removal of seeds, but the killing of a tiny unborn human being.