Enes Kanter Freedom has been on the NBA’s blacklist for criticizing the league’s shady and inappropriate relationship with China. He has been critical of the CCP’s inhumane treatment of the Uyghurs and has been banished from the league as a result. 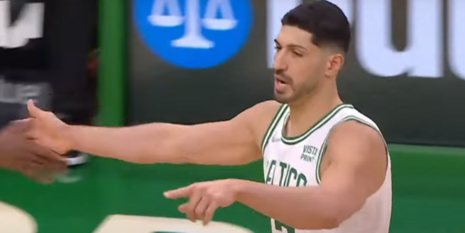 In November of 2021, he criticized Brooklyn Nets owner Joe Tsai for saying that all Chinese citizens “stand united when it comes to the territorial integrity of China and the country’s sovereignty over her homeland.” This implies that everyone in China is fine with the CCP’s dictatorial practices (such as shutting down the Hong Kong protestors or their Uyghur genocide), which is a lie.

Freedom took to Twitter to criticize this statement and call out Tsai for his cowardly words.

The owner of @brooklynNets@joetsai1999 is a coward & puppet of the Chinese gov’t.

Being anti-CCP does NOT mean being anti-Asian

It's possible to #StopAsianHate & to stand up against the CCP

Human rights are not "western" values, they are UNIVERSAL values!

This is just one example of how Freedom has unashamedly exposed the NBA’s hypocrisy of partnering with a country that commits many of the social injustices the league claims to fight against in the United States.

Since then, Freedom was traded by the Boston Celtics and waived by the Houston Rockets in February. While some claim it was because he was playing a career-low 12 minutes per game, the timing of his increased criticism of China combined with the series of movies is highly suggestive, something Freedom alluded to in March.

“It doesn’t take a rocket scientist to realize why I got little playing time and was released,” he said. “But it does take people with a conscience to speak out and say it’s not right.”

To make things worse, Freedom said he did not receive a single offer to play during the NBA’s free agency period.

“Free agency is open for one month. Normally, I should have already received offers. This summer I did not receive one single offer. The reason is that I spoke out against what is happening in China in recent months. The Chinese market is a big part of the NBA business. So, they will allow talking freely about anything you want until it hurts them financially. As soon as you do that, they will cut you. It is very sad and unacceptable,” Freedom said.

The 30-year-old has been a valuable piece of many recent playoff teams, so it’s not as though his production makes him unworthy of an NBA roster spot. Hopefully, at least one team will come back to their senses and give this man - who has done nothing worthy of how the league is treating him - a second chance.