A simple number swap between two football players led to a sizable donation to a charity designed to help military veterans. 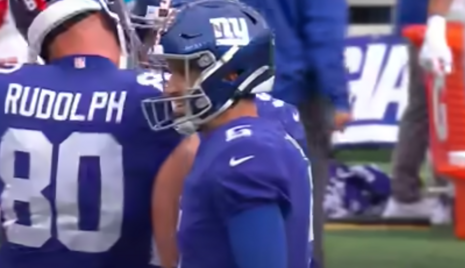 New York Giants edge rusher Kayvon Thibodeaux was drafted fifth overall from the University of Oregon this past spring, where he wore number 5. The rookie wanted to wear that same number in the pros, but had to pay veteran kicker Graham Gano a hefty $50,000 to have the honor of wearing that number (the payment occurred because the number is not within the specific number range allotted for defensive linemen).

While some players would rightfully be protective of the number, Gano was more than willing to change his number to earn a little extra cash. But he did not use it to buy himself a snazzy car or fancy clothes. Instead, Gano donated his earnings to Puppies Behind Bars, an organization that “trains incarcerated individuals to raise service dogs for wounded war veterans and first responders, as well as explosive-detection canines for law enforcement.”

The decision to donate to this organization made a lot of sense on a personal level for the kicker. His father, Mark, served for 30 years in the U.S. Navy, and he has several siblings and relatives in the military as well.

“I’ve seen the sacrifices that are made in those families, and also the traumatic events that happen that take a toll on some people's lives,” Gano said. ”I feel like it was where the money that Kayvon was donating would be able to make the largest impact and help the most people throughout him giving that money.”

Being a good teammate to a rookie was another motivation for Gano to oblige Thibodeaux’s request, something that many veterans like Ryan Tanenhill are not willing to do.

“The opportunity to give to something is exciting, and the number is obviously very special to Kayvon,” Gano said. “While it is special to me as well, there's a whole lot of meaning in that No. 5 to him. I just wanted to be a good teammate and also be able to support others throughout the whole process.

Gano wore number five when he joined the Giants in 2020 because his family (which has five children) showed him unwavering support through a difficult time in his career. Before signing with New York, he had not played in two years due to injuries to his non-kicking left leg. Despite the significance of the number, Gano was still willing to part with it to make an impact on a rookie.

This is a nice break from the self-centeredness we normally see in the NFL, and a good reminder that there are still a few decent human beings who have pro-American values that play the sport.