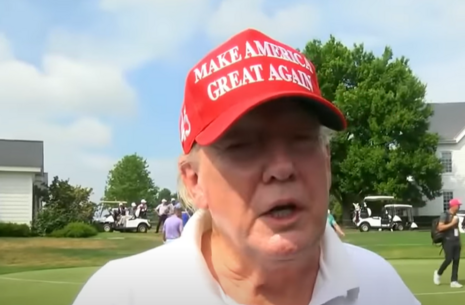 Former President Donald Trump won a senior golf tournament over the weekend and used the occasion to take a driver to President Joe Biden’s physical ability to lead the nation.

Following his victory Sunday in the Senior Club Championship at his own Trump International Golf Club, the ex-prez boasted on Truth Social media:

“A great honor to have won the Senior Club Championship at Trump International Golf Club, one of the best courses in the Country, in Palm Beach County, Florida.”

The 76-year-old former commander in chief then chipped away at his rival President Biden’s physical and mental fitness.

These remarks are obviously aimed at Biden, says Outkick blogger Mark Harris. President Biden did not keep his promise to release the results of his 2022 physical examination.

Biden has been too confused in some of his public appearances to remember promises made or where he’s supposed to go and what he’s supposed to do when the cameras are rolling. This has been evident during sports-related events at the White House, too.

It’s also evident that the president’s handlers often have to provide instructions for him in his ability to function.

The internist Dr. Siegel would not comment on Biden’s cognitive status but did say the current president has had a brain aneurysm and repair in 1988 and suffered atrial fibrillation and anticoagulation. This is a concerning health status that unfortunately puts President Biden at risk of small, silent strokes.