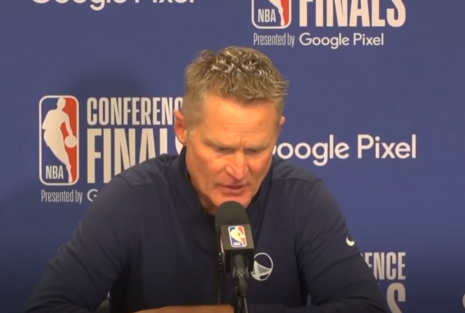 The president, vice-president and members of the Golden State “woke” Warriors met Tuesday at the White House under the guise of making America safer. Which is balderdash; they were taking aim at weakening the constitutional rights of Americans to defend themselves from violent attacks. The administration used popular athletes to help gain attention for its dog and pony show for the Democrat base.

Warriors’ Coach Steve Kerr, “splash brothers” Steph Curry and Klay Thompson, along with teammate Moses Moody, met with President Joe Biden and Vice-President Kamala Harris in a continuation of the Democrats’ never-ending war against the right to bear arms.

Gun control nut Kerr (seen in past press conference on gun violence) commented that “we learned a lot about what this administration is doing to help create a safer environment in our country. That is something that is very close to my heart.” We’ll believe that when the killing stops in Detroit, Chicago and other major metro battle zones.

Kerr also whined and moaned for gun control after the horrific school shooting in Uvalde, Texas. “They refuse to do anything about the violence, the school shootings, the supermarket shootings,” he said of Republicans who know that gun laws don’t stop criminals and guns are no better or worse than the person holding them. Kerr accused conservatives of putting a “desire for power ahead of the lives of our children, our elderly, and our churchgoers.”

President Biden has been on a real kick about guns this week. On Monday, he asked why Americans need so many bullets and called for a ban on the number of bullets that can go in a magazine. Democrats are obsessed with rifles, but knives accounted for three times the number of homicides with rifles in 2019, according to the FBI.

The president has mentioned the mental health issue, but passed the buck on doing anything about it.

The Libertarian Institute put it succinctly by saying “the crux of gun control laws has been how to disarm dangerous individuals without disarming the public at large.”

This is foreign thinking to Democrats, focused on magazine size and crushing the Second Amendment, as they are.

Heard anything about White House summits on knife control lately? I didn’t think so.