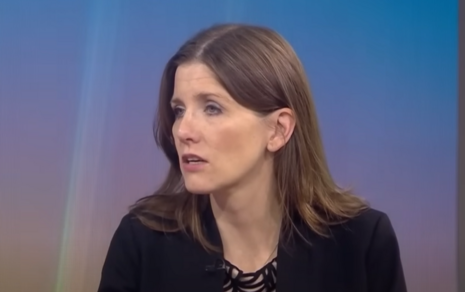 United Kingdom Culture Secretary Michelle Donelan aims to ban males from competing in women’s sports, but the nation’s Conservative Party does not have a good track record on resisting the LGBTABCD movement.

Donelan (appearing in photo) invited senior executives from sporting bodies in the UK to a meeting on transgenderism and sports. She is expected to pressure these officials to disallow males from participating in female athletics.

“Sources claim that the Tory official wants to take a ‘common sense’ approach to the issue, and that ‘basic biology’ must be taken into account to ‘preserve the key value of sporting competition – performing on a level playing field’.” Sports officials will be warned that women’s athletics “must be reserved for people born of the female sex.”

An unnamed source told the Express …

Many elite athletes will train and make sacrifices for years to have a fair opportunity at competing for honours, and Michelle wants to ensure they continue to have that.

She (Donelan) understands that this is an emotionally charged and sensitive subject. But in a sporting context, this issue is underpinned by scientific evidence. She has a plan to tackle it – not only for athletes, but event organisers, fans, and the future integrity of domestic and international sport.

Breitbart blogger Peter Caddle is skeptical that Conservatives will go along with Donelan. This is because the UK’s Conservative Party has taken a hands-off approach to the problem created by males competing on women’s teams. He stated:

How effective such a crackdown remains to be seen however, with the Tories historically doing very little to challenge transgenderism, even when it actively endangers the welfare of biological women, and even actively helping to advance gender ideology by, for example, planning to include gender identity in a forthcoming law banning so-called “conversion therapy."

Additionally, Caddle advises trans opponents not to expect too much from the Conservative Party, with its “abysmal track record” on actual conservative legislation. The party has a track record of refusing to protect the integrity of women’s sports. Donelan might have a hard sell ahead of her because Conservative support for transgenders is “widespread,” Caddle says.

The government all but yawned when the National Health Service (NHS) and NHS trusts backed trans ideology. Anecdotally, a hospital was accused of covering up a rape committed by a “transgender” patient, but officials told police that a rape “could not have happened” because there was “no male” present at the scene. Only a man can commit rape, they asserted.

Furthermore, a Conservative Member of Parliament, Jamie Wallis, claimed a new identity as a “female.” His outing occurred after he fled the scene of an auto accident wearing high heels and a black leather skirt. Former Prime Minister Boris Johnson praised him for his courage.

“The Conservative Party I lead will always give you, and everyone else, the love and support you need to be yourself,” Johnson said.

British cycling, triathlon and volleyball have either banned trans males in women’s sports or are considering the possibility of doing so.