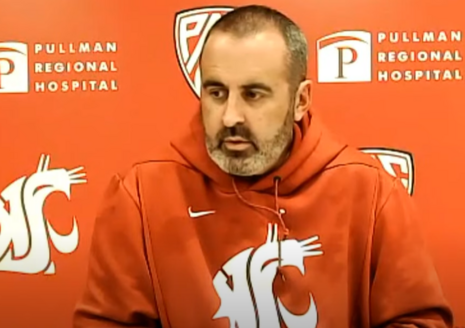 Nick Rolovich has struck back against Washington State University for firing him last year from his job as head football coach at the school, along with Washinton Gov. Jay Inslee, who mandated vaccinations for all state employees. Rolovich last week sued the governor and the university’s athletic director, Patrick Chun, in Whitman County Superior Court.

The ex-WSU Cougars’ coach Rolovich is contending that the fix was in at Washington State, and that Chun demonstrated “animus” toward his Catholic religious beliefs. Rolovich’s lawsuit charged that Chun badmouthed him as a selfish “con man” for seeking a religious objection and promised it would be rejected. There’s “due process”, leftist-style, for you.

The former coach’s attorney, Brian Fahling, wrote a letter to the school calling the firing “unjust and unlawful.” The letter also stated:

Since at least early April (2021), it became clear that Chun had already determined that Coach Rolovich would be fired. Chun’s animus towards Coach Rolovich’s sincerely held religious beliefs and Chun’s dishonesty at the expense of Coach Rolovich during the past year is damning and will be thoroughly detailed in litigation. Chun’s discriminatory and vindictive behavior have caused immeasurable harm to Coach Rolovich and his family.

Rolovich was the highest-paid state employee in Washington, earning $3 million per year, and he had three years left on his contract. In spite of his claims, WSU responded to the lawsuit with defiance, calling it "wholly without merit.”:

“Washington State University carried out the Governor’s COVID-19 vaccination proclamation for state employees in a fair and lawful manner, including in its evaluation of employee requests for medical or religious exemptions and accommodations. For multiple reasons, Mr. Rolovich did not qualify, and the university firmly stands by that decision.”

Gov. Inslee was also sued by dozens of state employees last year. Many left-wing local, state and federal officials mandated COVID vaccinations, even though many segments of the population were not at high risk of infection, and many vaccinated people caught the virus anyway.

The CDC admitted in 2021 that “breakthrough infections are expected and some people will get sick, be hospitalized, and even die from COVID-19 after being vaccinated.”

The Mayo Clinic conceded that vaccination side effects can include pain, redness or swelling where the shot was given, fever, headache, muscle pain, chills, joint pain, swollen lymph nodes, nausea and vomiting. Additionally, the Janssen/Johnson & Johnson COVID-19 vaccine can cause “thrombosis with thrombocytopenia syndrome. This is a blood-clotting problem that can be life-threatening.”

Just what a Pac-12 football coach doesn’t need to deal with.