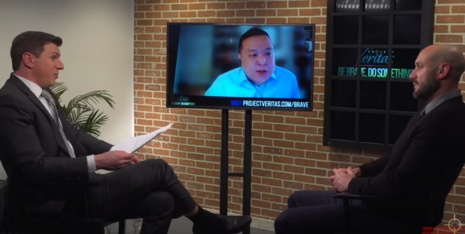 Have you noticed how race-obsessed ESPN is? Project Veritas has, and it released video Tuesday evening that portrays the sports network as a “toxic, racist workplace environment.” Former ESPN studio operator Trevor Adams produced undercover interviews demonstrating the problematic workplace environment as viewed by current employees.

“Whistleblower-recorded audio and video show numerous ESPN employees discussing what they see as a toxic, racist workplace environment which directly contradicts the image that ESPN tries to project.”

Adams once sent a company-wide email outlining his concerns about the ESPN workplace environment and was subsequently identified by the company as a “security threat.” Several colleagues supported what he did, but two days later law enforcement showed up at his home, and he was fired soon after Project Veritas requested a comment from Human Resources about Adams's email message. Law officers confirmed to Adams that they were responding to an ESPN request.

Adams says that working at ESPN, he witnessed “lots of discrimination and racism.”

Among the revelations of the hidden video were these:

Erik Swanson, ESPN senior video editor: “I can’t look for them to do the right thing when it comes to social issues. We don’t know what we’re talking about, and we shouldn’t comment on anything about it companywide. There’s no reason. We’re not in this social sh*t business.”

A black studio operator spoke about “the racial shit that happens in here all the time.”

Alyson Lang, a white woman who covers the Southeastern Conference for ESPN, said: “I know the comments that have been made to me at work and the conversations that have been had in front of me at work, like, I mean just blatantly racist sh*t. Just blatantly, like, complaining to me that we have three white hosts, and I’m like, ‘What do you want me--do you want me to leave?’ And, like I said, At the end of the day, they’re asking us to choose between us and social media reaction.”

On-air talent Matt Schick, a white guy who’s been with ESPN since 2012, said the network no longer gets the same respect it previously commanded. “It has different connotations now.” He also refers to ESPN as “a global entity of forced thought.”

A black woman and lead audio communications specialist, tells Adams, “that’s not how it is” when addressing the difference between ESPN’s workplace environment and social justice image. “From my experience, especially with the discrimination and the racism, I think he’s [Trevor Adams] just trying to shine light on a bigger situation, and I said, ‘I’ll back him.’ I wanted to do what he did, but I know if I would have done that, I would have been fired.’”

Nick Calabrese, lead audio communications specialist and accused by the HR department of racism, says ESPN is trying to be a “face” for Black Lives Matter. Graphics Specialist Doreen Murray says ESPN is very quick to scream “racism” at its employees.

Adams (at right in above photo) concludes, in his comments to PV founder James O’Keefe, that he hopes he gave hope to people to come forward without receiving blowback and the strength to speak up.

Outkick writer Bobby Burack reviewed the PV video and wrote, “Since 2020, ESPN has been MSNBC masquerading as a sports network, spreading blatant lies, racist commentary, CCP talking points, partisan politics and BLM.” He also posted a photo of the newest members of ESPN's college football broadcasting crew, showing that all 14 hires are black. Whites, like Max Kellerman, almost have to be "grandfathered in" to work at ESPN now, he charges.

Burack says Project Veritas exposed “the racist rot that pervades ESPN” and predicts the network will not change.