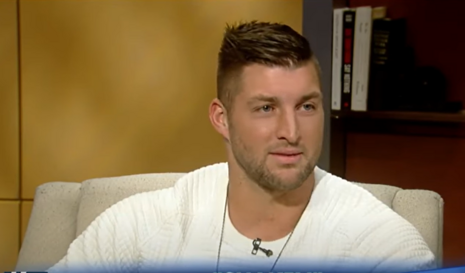 Now coached by Urban Meyer, who guided the Florida Gators during Tebow’s college career, the Jaguars worked out the former Heisman Trophy-winning quarterback at tight end. The news of this event ignited a race-laden, prayer-bashing tirade by Parker.

Media haters like Parker could not stand Tebow when he played for the Denver Broncos and three other NFL teams a few years ago, or when he was a national champion with the Gators. Some of them can’t see past his skin color either. Tebow certainly wasn’t the most polished passer by any means. But he is a leader with an infectious attitude who provided an intangible ability to help Florida and Denver win.

“It’s official: Tim Tebow is the White Privilege King,” Parker blared in his opening sentence. Which appears below a photo-shopped image of Tebow sitting on a throne wearing a crown.

The Jacksonville tryout came “Just when we thought we were done with everyone in sports bending over backward for someone totally not worthy,” Parker continues. It sounds crazy, but it fits for the royal treatment Tebow undeservedly gets, according to those on the Left who hate the Christian athlete who previously played pro football and minor league baseball.

In fact, Tebow Derangement Syndrome was so bad that the co-host of “Undisputed,” Shannon Sharpe, said he should not have even been allowed to play pro baseball. Co-anchor Skip Bayless lost his mind over Tebow’s Jacksonville tryout.

Tebow isn’t any good at sports, but “other white people with power like him and apparently will do whatever they can to help him succeed,” Parker wrote. He’s a round peg that sports teams keep trying to fit into a square hole.

Parker rationalized that people love Tebow because he’s a “God-fearing, nice guy.” (The horror!) If the fan favorite Tebow had gotten a prior opportunity to play for Jacksonville, his jerseys would have flown off the shelves.

“People would have been doing his trademark pray kneel all over northern Florida,” Parker fears. And, unlike the media’s idea of sports royalty Colin Kaepernick, Tebow does the wrong kind of kneeling. When Kaepernick shamefully kneeled during the national anthem, it was all about free speech, the left-stream sports media screamed. When Tebow kneels to honor God, it’s too horrible imagine it happening in the NFL again!

Most athletes trying out for a new position at the NFL level would have drawn laughter. “Not Tebow. This is where White Privilege comes in,” Parker sneers.

The doors of opportunity open for Tebow only on account of one factor, Parker charges. It’s not athletic talent either. “Hence, it must be about race. It’s a sad reality.”

The main take-away here is that Jacksonville has not signed Tebow to a contract. He only tried out for the team -- for his old coach -- but that’s enough to set off a revival of Tebow Derangement Syndrome.