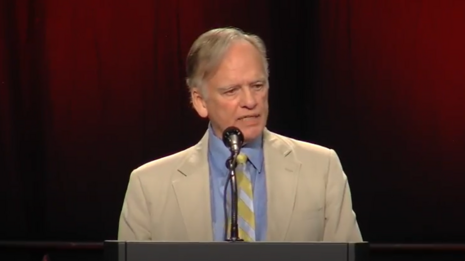 Inside the Beltway sportswriter Thomas Boswell reaped the whirlwind for assuming that Major League Baseball knew the nation’s pulse when it took the 2021 all-star game away from Atlanta. He drew a hurricane blowback on Twitter for his outlandish claim that it was baseball’s best move since integrating the game in 1947.

Boswell has spent a long career writing for The Washington Post, has written several baseball books, is a member of the National Sports Media Association's Hall of Fame and was a featured expert in Ken Burns’s baseball history series. Like all Post sports writers, he's an insufferable gasbag, so he deserves all the ridicule he's getting for this stupid tweet: 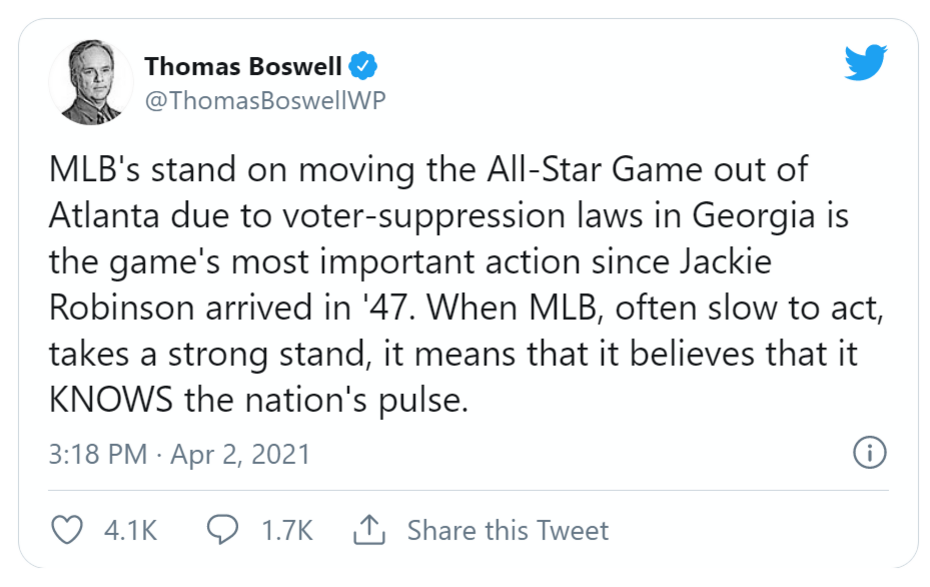 Obscure, unknown Americans without Boswell’s pedigree or his list of accomplishments made him look like a raw rookie for his ridiculous reasoning in defense of baseball’s Georgia cancellation. They told him baseball does not know the nation’s pulse when it comes to wokeball.

A man with the great handle “Too Bright For Your Gaslight” tweeted:

Other Boswell detractors tweeted about how “gross and disrespectful” Boswell’s comments are to Robinson, “an actual civil rights hero.” It was the dumbest thing another man had read on The Washington Post’s “garbage website.”

One of the more stinging rebukes read:

A woman said baseball has no clue on the nation’s pulse.

The majority of Americans support the requirement of voter ID, added another Boswell critic:

“Woke cancel culture relocated an event while robbing Atlantans of huge economic impact vs. a single athlete risking everything, crossing the color barrier and changing a sport forever,” another commenter added to the public grilling of Boswell.

Wokeball and Boswell may want to check the national pulse again. As baseball stat guru and historian Bill James tweeted, MLB may have stepped out of the proverbial batter’s box:

Boswell is the second high profile sportswriter worming his way into the Hall of Shame over the Georgia debacle this past week. Peter Gammons also made it by comparing Georgia Gov. Brian Kemp to a KKK member in 1859.