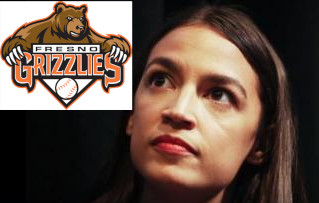 There was a time a few years ago, after Mike Wise left the paper, that I feared The Washington Post Sports section would suffer from a want of condescending gasbags. At an organ like the Post (motto: Democracy Gets Dopey Around Dusk) a writer’s pomposity is nearly as important as his ability to regurgitate conventional wisdom.

I needn’t have worried. Thomas Boswell is at the top of his insufferability game. The sports columnist is upset about the Fresno Grizzlies running a patriotic Memorial Day video that insulted Rep. Alexandria Ocasio-Cortez (D-N.Y.), and he wants scalps. (For the record, that is not a sneaky reference to the Post’s long, ultimately disastrous campaign against the Washington Redskins’ team name. Nope. Not a bit of it.)

As Boswell explained in a May 30 column:

If you’re the one who hasn’t heard, the Grizzlies ran a tribute video honoring military veterans as patriotic words by former president Ronald Reagan were played. As he denounced “the enemies of freedom,” pictures flashed of North Korean dictator Kim Jong Un and former Cuban president Fidel Castro. And Ocasio-Cortez.

Get that? “If you’re the one who hasn’t heard …” Simply everyone is abuzz about this! Why, in the clubs and salons and the better sort of cocktail parties, people talk of little else. Did you flip to the sports page to find out if the Nats bullpen (sheep-pen?) had committed ritual seppuku yet? No problem, Boswell will get you up to speed on the real sports issues.

The Grizzlies apologized for the video and did an internal investigation. The Nats, who have the misfortune of sharing a press corps with the rest of D.C., were asked about it and proclaimed themselves okay with the Grizzlies efforts. This will not do.

“The Grizzlies’ current position — that they have found a ‘remorseful’ but unidentified employee and are studying the matter — can be only a beginning,” intoned Boswell. “Even though the video was pulled from YouTube, the Grizzlies showed it to a crowd on a military holiday — and identified a congresswoman as an enemy of freedom. Someone is responsible. And someone’s got to go.” So a story that originated in Fresno on Monday must be kept alive in D.C. until liberals get their pound of flesh.

“If the Grizzlies don’t do it, then the Nats, who had nothing to do with the hate-fomenting message,” he said, “must intervene.” That’s what he really wants. A major market MLB franchise reaching down into its Podunk AAA minor league affiliate to destroy whichever special events intern or $10 per hour promotional coordinator failed to notice the AOC bit. Liberals love the little guy.

To be clear, a video -- any video -- insulting any political figure should never have run at a ballpark, Memorial Day or not. Because nobody should have politics intrude on their day at the game. If they want partisan hackery mixed in with their sports, they can stay home and watch ESPN -- or read the Post sports page. As for the content, is it hate speech? Not really. Is it an “implicit incitement to violence,” as Boswell condemns it? No. It’s an over-the-top and debatable description of her policy stance. Ocasio-Cortez has made herself the mouthpiece for a fundamentally un-American ideology, one that has a track record of failure, misery and, in may cases, tyranny. Americans still, thankfully, have an innate distrust of socialism.

And Boswell has a distaste for that distrust. “Americans,” he sniffed, “are sometimes terrified by ideas that are normal around the world but unfamiliar to them and thus easily demonized. It’s a lousy national trait.” Sorry Tom. If that’s how you feel, we’ll try to do better.

But that’s not all that bugs him. “For decades, the political right has tried to appropriate every symbol of America, patriotism, freedom and democracy as its property. Even apple pie and baseball. That’s not illegal. It’s politics. The left tugged back — mostly ineffectively."

Well, it really didn’t. The left eschewed overt patriotism, and at various times embraced socialism, apologized for communism, and loudly denounced the history of America and the rest of the West.

Still, “It’s the next step that is so pernicious. Once wrapped in the flag, one political party can pose as the only authentic valid party, and those who disagree with them suddenly become ‘enemies’ of freedom or ‘the people’ or even enemies of God as viewed through a politicized theology.”

So this incident isn’t the mistake or even deliberate malicious act of some Fresno flunky. But neither is it all our fault -- toxic, polarized political environment and all that. Blame, it seems, rests with “one party” “wrapped in the flag.” (Hint: not Ocasio-Cortez’s, or Thomas Boswell’s party.)

I’m certain Boswell is sincere in his concern about “hateful speech -- and the implicit incitement to violence that always lies within it.” Which is why I eagerly await his reaction column to the next Emmy’s or Oscars, or whichever is the next entertainment awards show festival of hate for Trump and other Republicans. Should be an enlightening read.