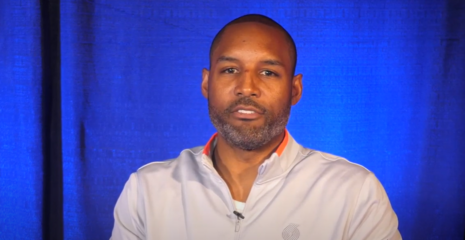 Get used to it. Any hiring of a white guy to serve as head coach of an NBA team is going to be met with derision and cries of white privilege by race-baiting media and players. It happened a few months ago when Steve Nash was hired to coach Brooklyn, and it’s happening again this week after Minnesota hired Chris Finch, who is white.

Dan Feldman of NBC Sports wrote that Minnesota’s associate head coach (and SJW) David Vanterpool (appearing in above photo) would’ve been the natural fit for the job, and added:

“It has not been lost on people that Finch is white and Vanterpool is Black.”

There are “legitimate questions about” Minnesota’s hiring process, Feldman continued. “But when people place outsized emphasis on hiring someone they’re comfortable with, that tends to favor the type of candidates who are already entrenched. It’s antithetical to diversity. The demographics of NBA coaches indicate a problem. Black coaches don’t get the same opportunities as white coaches.” The playing court is also “antithetical to diversity” with 74 percent of the players being African American.

The co-host of ESPN Hoop Streams, Kendrick Perkins, tweeted his anger over the hiring of the white coach, and LeBron James responded “1,000%!!!” support.: 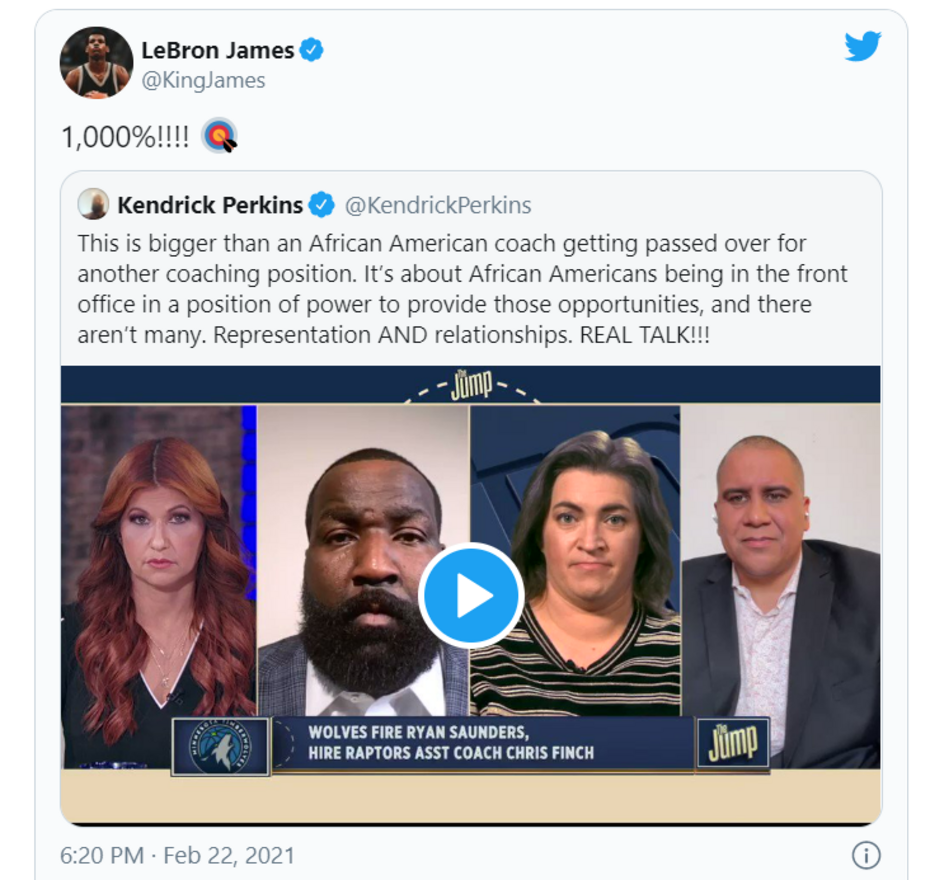 MSN Sports carried a story by Larry Brown about how “odd” it was for the African American assistant coach to get passed over for the head coaching job and about how angry Damian Lillard, who plays for Portland, is over the Vanterpool snub.:

“They are always moving the goalposts,” Spears groans. “Those words are regularly spoken by aspiring and qualified Black coaches and general managers whose vast experience has never been enough to land their coveted NBA dream job.” An anonymous Black NBA assistant coach commented to Spears:

“It’s typical of the Black coaching experience in the NBA,” said another anonymous source, a Black head coach. “They use your skill set during the difficult times, but when it’s time to reward you with an opportunity, they always seem to find a reason to not, and then expect you to continue to be the good soldier.”

Unknown sources also told Spears that the Minnesota Timberwolves did not view Vanterpool as a good fit for head coach even though he has strong relationships with two of the team’s star Black players.

The Timberwolves say they are invested in professional development for all of their coaches, but Spears cited his lengthy list of anonymous sources to ding them for not interviewing a diverse group of qualified coaches. And even if Vanterpool wasn’t their guy, other minorities should have been considered for the job, Spears said.

None of the people cited above are mentioning how losing teams often bring in new coaches from the outside to change the defeatist culture.