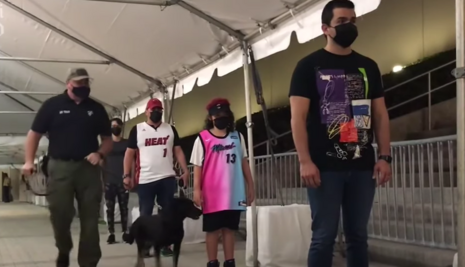 We knew the NBA was going to the dogs, but the Miami Heat’s plan to use China Virus-sniffing canines to hound fans’ entry into the arena is a bit over the top. At any rate, it’s bad optics for the NBA, already on record as too cowardly to stand up to China on human rights.

In a strange twist of logic, CBS News says the Heat are “bringing back fans with help from some dogs.” That is partly true. At least limited numbers of fans are being allowed to view this season’s games, but some fans attempting to enter Miami’s AmericanAirlines Arena will be sent home if coronavirus-sniffing dogs identify them as China Virus-positive.

A game against the Lakers or 76ers will be the least of the Miami fans worries. Upon arrival at the arena, fans must pass through a screening area where detection dogs will walk past them. If the dog keeps going, the fan is cleared for attendance at the game, but if the dog sits, that means the fan is assumed to have the China Virus and will be denied entry. How accurate are these dogs? CBS claims the dogs tested in Germany are 94 percent accurate.

For fans who are allergic to or fearful of dogs, the Heat will offer an option to skip the dog screening and submit to a rapid antigen test. They’ll have to wait 45 minutes for the results of the test.

Basketball appears to be fighting an uphill battle for fans and players alike. CBS reports that Miami’s canine capers come in a month when the NBA has already postponed 19 games because of players testing positive or due to teams implicated by contact tracing. At season’s start it was reassuring to fans that they could attend games, but if it’s come down to postponements and dog sniffing, it remains to be seen if the league can finish the season outside of a bubble.

On the college basketball level, Michigan and Oregon recently shut down activities and many games have been lost or postponed.

“Dogs have a superior sense of smell, which is why they're often used by law enforcement to find everything from drugs to bombs to missing people. Medical researchers have long reaped the benefit of canine sniffing, training some dogs to detect when a human is dealing with things like too much stress, too little blood sugar and even certain cancers.”

Add NBA fan sniffing to that list of dog talents.

The NBASJW has bragged about how successful its fan-less Florida bubble was last year in preventing the spread of the China Virus. The epidemic is just as bad now, and with postponements and dog sniffing, the league appears to be flapping in the wind about what to do. As a matter of fact, it’s the woke NBA that fails the smell test in many regards.