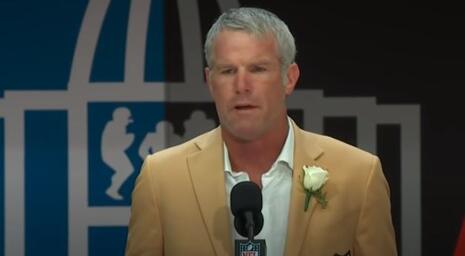 During President Donald Trump's Wednesday Town Hall, host Eric Bolling indicated that NFL Hall of Fame quarterback Brett Favre submitted a video with a question about how pro sports can present anti-racism messaging without alienating fans. The Washington Post's Des Bieler used this story as an opportunity to justify the social justice activism that's pushing fans away from sports.

Before reporting the president's response to Favre's question (see file photo of Favre), Bieler launched, at length, into a justification of athletes' claims that America is systemically racist and their offensive controversial protests.

For instance, Bieler begins his unquestioning review of protest overkill in sports by referring to "historical oppression" as a matter of fact. It's been "at the forefront of a national conversation since the killing in May of George Floyd while in the custody of Minneapolis police, and when the NBA returned to play in July, the league took several steps to raise awareness of systemic racism."

The words "Black Lives Matter" were prominently displayed on NBA playing courts. Instead of wearing uniforms that displayed their names, NBA players wore social justice phrases, such as "I can't breathe" and "Say her name." Bieler listed several of these phrases to make sure few protest slogans were left behind.

Bieler turned to the NFL to remind readers of the "End racism" and "It takes all of us" messages in all of its end zones. Oh, and just in case anyone had forgotten, he listed some of the slogans pro football players are wearing on their helmets -- "Black Lives Matter," "Stop hate," "End racism" and more.

Also not to be forgotten or listed before getting around to Trump's response to Favre, is Bieler's insertion of a reminder that athletes in the NBA, NHL, NFL, Major League Baseball and Major League Soccer have (disrespectfully) kneeled during the national anthem. Which athletes have turned into a ritual aimed at dishonoring America.

A Washington Post story about painting America as a racist nation would not be complete without mention of the notorious Colin Kaepernick. Bieler notes that this year's anthem kneelers are reviving the demonstration of Kaepernick, who "inspired other athletes to do the same." President Trump condemned him and criticized player protests.

By the time Bieler actually finishes wading through the offensive, fan-alienating history of protests damaging sports fan bases and gets to Trump's response to Favre, it's like a mere afterthought.

The president refers to Favre as "a great guy," "a champion" and "a winner." Then he says:

President Trump said the NBA Finals TV ratings were down 70 percent this year, and Bieler corrected that to 49 percent (a horrible number regardless!). Like other sports media lemmings, Bieler offers the standard narrative that the NBA Finals dropped like a rock because it did not take place during its traditional June time period.

Bieler adds the NFL's 13-percent drop-off through five weeks of the 2020 season, but excuses away the possibility of radical activism turning off sports viewers in droves.:

"These decreases in viewership likely can't be attributed entirely to shows of social activism by sports leagues, particularly given that they represent the continuation of years-long trends, which may have been exacerbated during the pandemic."

You can whack Left-stream media over the head with the truth, but it seldom makes an impact on their self-defeating arguments. 2020 is the fifth season of athlete protest, which constitutes a "years-long" trend of declining fan interest.