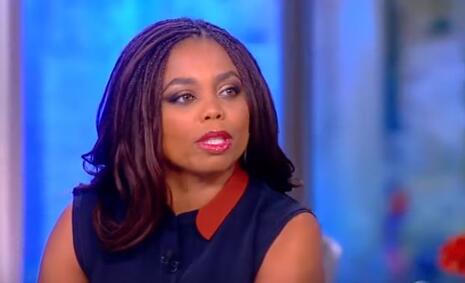 Toxic Tweeter Jemele Hill on Sunday managed to lower her subterranean social media bar by writing the U.S. is worse than Hitler's Nazi Germany. Taking the first line in Sam Cooke's old song "Wonderful World," Hill showed she "Don't know much about history," but as a race baiter extraordinaire this African American woman knows how to bludgeon the country that's made her famous and wealthy.

As a former ESPN SportsCenter co-anchor, Hill gained national notoriety in 2017 for tweeting that President Donald Trump and his supporters are "white supremacists" -- positioning her closer to an inglorious exit from the Worldwide Leader in "leftist" Sports.

Hill, now a writer for The Atlantic magazine with 1.9 million Twitter followers who last year deleted a tweet that referenced the assassination of the president during his State of the Union address, drew her conclusion from reading the book "Caste", written by Isabel Wilkerson:

As the outrage against Hill came thundering in on Twitter, she doubled and tripled down on her detestable claim:

Hill was hired by The Atlantic to cause "useful trouble," in the words of its editor-in-chief, Jeffrey Goldberg. She writes sparingly for the publication, but earns considerable notoriety and a hefty salary as a race baiter on her "Unbothered" podcast and the VICE TV show "Cari & Jemele: Stick To Sports." Hill also hosts and narrates social justice documentaries like LeBron James' "Shut Up and Stick To Sports" and she's currently producing an ESPN documentary on America hater Colin Kaepernick.

As of Tuesday, while the Jacob Blake controversy was boiling over, Hill's social justice media pals and SJW athletes were not circling the wagons around her. Conservative media like Fox News, The Daily Caller and Outkick were dominating the narrative on Hill's indefensible indictment of America.

Outkick's Clay Travis said on his Monday radio program that Adolph Hitler used the same argument Hill is now using in an attempt to persuade nations not to join the allies aligned against the Nazi regime. Travis said it's "absolute idiocy" to say the U.S. and the Nazi's are similar. He added:

"I think it's important, for people who have a poor understanding of American history or of world history, to throw punches back at stupidity. We need to have a marketplace of ideas where ridicule firmly exists and where people who say dumb things that are inaccurate and not supported by the historical record have to bear the brunt of what they are saying."

Because ESPN commissioned Hill to produce the Kaepernick documentary, it should be ashamed beyond measure of Hill's latest social media atrocity, Travis says.

David Hookstead of The Daily Caller said Hill is living in a "delusional fantasyland."