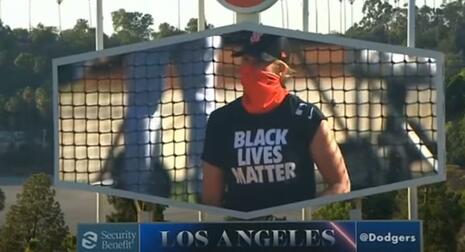 It takes a lot of guts to swim upstream against the Black Lives Matter tidal wave sweeping the country. New York Post columnist Phil Mushnick looks like Michael Phelps doing just that in a post exposing pro sports providing cover for the true and troubling nature of BLM.

Mushnick calls out black-on-black crime as a significant problem and exposes BLM as a hollow movement.:

Black Lives Matter is a sweet-sounding con. The Minneapolis police killing of George Floyd has served less as a cause than an excuse, a welcomed starter’s pistol to foment radical, violent destruction of anything that strikes BLM "protestors" as a target for vandalism, arson and revolution to feed extreme left-wing fascism.

The founders of BLM are proudly “trained Marxists,” Mushnick says. Black Lives Matter has almost nothing to do with black lives, but is bent on destroying American historic symbols and institutions, "not to demonstrate concern for the continuing and growing slaughter of blacks in our cities."

"To small surprise, our pro sports, stuck in frightened pandering mode, chose not to know or to ignore this," Mushnick continues. And now no NBA, NFL or MLB game "will appear on TV without the presumption of every white viewer being a racist or in immediate need of racial recalibration. Having not oppressed a minority since breakfast, that’s sickening."

Mushnick alleges none of the sports commissioners has taken the time to determine for themselves what BLM is really about. They have deemed that Black Lives Matter deserves our unquestioned support.:

Taking a knee is now a visual, take-names referendum on whether one is a racist, courtesy of commissioners who couldn’t foresee the large can of lockstep political goose-stepping they invited.

To people who have actually examined the nature of BLM, they find it's "antithetical to democracy." Nevertheless, to refuse to kneel to BLM servitude is to risk the perils that go with non-compliance.:

After all, BLM has inspired the destruction of anything and everything, including statues honoring the bravery of pre-Civil War abolitionists. That means more to BLM than any latest count of dead-in-the-streets black lives.

The name Black Lives Matter may have a nice ring to it, but Mushnick asks rhetorically if anyone has ever seen a BLM urban protest of blacks daily murdering blacks?

"But BLM is too busy advocating indiscriminate rioting, looting, vandalizing and destruction of churches, museums, municipal buildings, parks, public transportation and destruction of businesses — some black-owned," the Post writer charges.

American sports, and particularly activists LeBron James and Colin Kaepernick, chose Nike money over democracy, Mushnick explains. Red China-partnered Nike millions call many shots in U.S. sports." Their progressive Black Lives Matter movement has never cared about black lives "unless their deaths can be exploited for chaos, has gamed the MLB, the NBA and NFL."

Prior to the recent Yankees-Nationals season opener, the public address system played the voice of Morgan Freeman saying, “Today, as every day, we come together as equals.”

Which Mushnick finds false -- because the former Sacramento Kings long-time television broadcaster Grant Napear had previously tweeted the words “All Lives Matter — every one of them!” He was branded a racist and canceled from his radio program.

"But in the name of progress and equality, we keep sprinting backward, our eyes closed, capitulating to those who keep laying us lower," Mushnick says.

In contrast to what's going on at the stadiums and arenas, a recent New York television station reported that five black teens had beaten the hell out of a 12-year-old black child. A black neighbor named Ken Garner told a reporter, “We always talk about Black Lives Matter, but what are we doing to ourselves?"

Mushnick writes: "Similar is now regularly asked by the families of victims of violent black-on-black crime, especially murder, including infants and children, by gun-wielding young men who daily escalate the record death counts within our cities. And all of it occurs to the conspicuous absence and silence of Black Lives Matter."