No More 'Shut Up and Dribble:' Super-woke NBA to Put BLM Slogan on Courts 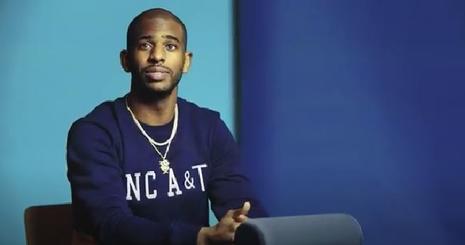 The conclusion to the 2019-2020 pro basketball seasons promise to be woker than woke. NBA and Women's NBA players fully intend to make social justice the centerpiece of their basketball season re-starts.

NBA games resume at Disney World in Orlando July 30, and ESPN reported Monday that the three basketball courts there will all feature the words "Black Lives Matter" painted inside both sidelines.

This is only a small part of the busy social justice agenda underway in the big leagues.

NBA Commissioner Adam Silver confirmed the league formed a foundation “to expand educational and economic opportunities across the Black Community.” He and players union president Chris Paul (seen in photo) called on the league's teams to improve hiring practices for minorities and women seeking front office and coaching positions.

The NBA also drafted a 113-page health and safety protocol for its partnership with the National Urban League.

Trend-setting WNBA players are way ahead of these male pikers, though. They're already planning to wear warm-up shirts displaying the phrase "Say Her Name," a reference to Breonna Taylor, a victim of a police shooting.

NBA teams are also holding Zoom conferencing calls, not to discuss strategies for upcoming basketball games, but to hear guest speakers enlighten them on social justice and racial issues. Basketball IQ is definitely taking a back seat to wokeness and social justice IQ.

One would logically assume that in this whirlwind of social justice mania the national anthem will be discontinued or at least a target for kneeling protesters. However, USA Today reports, "It is not clear if the NBA will allow teams to protest during the national anthem after having a rule established in 1981 that requires teams to 'stand and line up in a dignified posture.'" NBA spokesman Mike Bass told USA TODAY Sports recently “that we will work in partnership with the players on important issues like this.”

Paul admitted that basketball is definitely taking a back seat to the social justice frenzy: “We agree on a number of initiatives that would spotlight social injustices. There’s a number of things … . I’m excited for what we can do that’s a lot bigger than the game.”

“We’re just trying to continue to shed light on the different social justice issues that guys around our league continue to talk about day in and day out. People are saying that social justice will be off of everybody’s mind in Orlando. With these jerseys, it doesn’t go away.”

Just think of the turned-off fans who might well go away from all this activism, though, Chris.