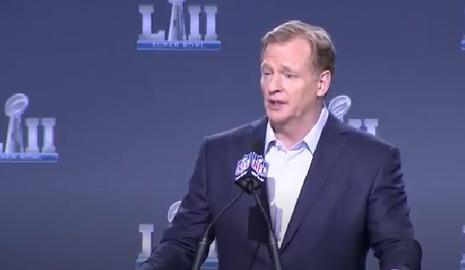 New York Daily News sports writers on Saturday blitzed the NFL with renewed calls to sign Colin Kaepernick. Bob Raissman urged the NFL Network to run a marathon marketing the lightning rod former pro quarterback. Mike Lupica wrote the New York Giants should do the right thing and give him a chance to be their quarterback.

Media desperation for a Kaepernick signing has been ongoing for the past four years. NFL Commissioner Roger Goodell gave the media new hope when he recently vowed, on ESPN, to encourage some team to hire the quarterback whom the league blackballed (Raissman's word) after he kneeled during the national anthem in 2016 to protest racism and injustice.

Raissman accuses Goodell (see file photo above) of playing politics and demands he offer a direct apology to Kaepernick. Until that happens, or until a team signs him, "all this other stuff is phony lip service, a desperate attempt by the commissioner to leave the perception he is marching arm-in-arm with the protesters." Kaepernick deserves much better than he's getting from the NFL, Raissman adds:

"Goodell, and the NFL’s suddenly silent owners, need to do more. Throughout the four years this controversy has brewed, the league has only fortified Kaepernick’s image as a rebel with a cause. The NFL, along with its own network, ignored how productive he was during most of his six seasons with the 49ers. The line coming out of the league’s propaganda arm, the NFL Network, parroted by analysts and Tape Heads alike, was Kaepernick’s skills had diminished. It was as if it was impossible for a quarterback, now 32, to regain the magic touch."

Opposition to Kaepernick took the focus off the memories of just how good the ex-49ers QB was and still could be, gushes fanboy Raissman. To help re-educate the NFL and football fans, the league needs to air a Kaepernick Marathon on the NFL Network, per Raissman:

"This type of analysis could actually whet the appetite of fans who have forgotten the skills he brought to the field and the upside he could bring to a current team. While his football future is still up in the air, instead of just paying lip service, the NFL should actually do something for Kaepernick."

Raissman envisions a marathon that would rehabilitate Kaepernick's badly tarnished off-the-field public image. Raissman doesn't use this language; he positions it as “forgotten accomplishments on the field," and theorizes that by replaying some of his best games, people will forget and forgive his history of bad behavior and fall in love with the guy.

Raissman's Daily News colleague Lupica wrote that it would only be the right thing if the New York Giants give Kaepernick a chance. After all, the Giants sport a horrible 12-36 record since Kap last played in the NFL:

"Now justice for Colin Kaepernick would be the opportunity to get back to work, in the America where people have taken to the streets, and in the millions, in the name of social justice ... ."

If the Giants don't take the bait, then the Kaepernick Marathon could help his cause by featuring a panel of analysts discussing his football future and "his significance as a social activist. Look, it’s not like NFLN is pushing out 100% quality content as football waits to see if training camps even open. There’s plenty of time to air the Kaepernick Marathon."

Goodell should encourage the marathon, Raissman, the would-be marketer for outrageous social justice warriors, says in a final pitch.