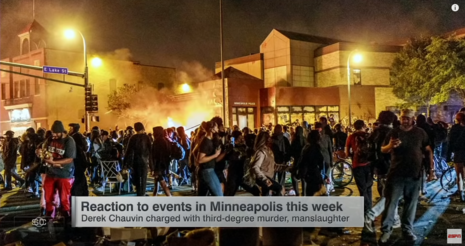 ESPN is not a political network, says its president, Jimmy Pitaro. Like heck it's not! The network has used the George Floyd story to completely go off the rails, veering far out of its lane and abandoning all pretense of sticking to sports. In a revealing Washington Post story, Ben Strauss reports ESPN has thrown its full capacity into covering the protests, through a sports lens and beyond.

Make that a sports-lite lens.

As Strauss continues his inventory of ESPN's big social justice adventure, he explains that First Take co-host Stephen A. Smith went on ESPN Radio Monday for two hours to talk politics. He excoriated Joe Biden "for his support of a 1994 crime bill 'that many criminal justice reform advocates believe led to increased incarceration for African Americans.'" Smith also blasted President Donald Trump for "threatening to send 'vicious dogs' to attack protesters outside the White House."

Across the sports media spectrum, almost no one is sticking to sports right now, Strauss writes. On Fox Sports 1, activist and rapper Killer Mike talked with Skip Bayless and Shannon Sharpe about an effort by an Iowa elementary school to teach students about racial prejudice in the 1960s. TNT presented a special show Thursday in which Charles Barkley and NBA Commissioner Adam Silver talked about racial injustice.

Reporters from Yahoo! Sports and The Athletic detailed their own run-ins with police officers. The Players Tribune has posted several similar stories by African American athletes, including one by former NBA player Caron Butler who said he's been arrested 15 times. NBA player Kyle Kuzma writes on The Players Tribune that he ain't sticking to sports either.

Yahoo writer Vincent Goodwill said: “You can’t say, ‘Stick to sports’ right now because there are no sports,” and he believes ESPN’s embrace of the story "opened up a space both for him and other reporters. It seems like ESPN has given license to people.” He also sees his social justice focus as a form of therapy, which ought to get him some speaking invites at bleeding heart liberal university journalism schools.

Social justice coverage by ESPN is "all-consuming," and SportsCenter host Michael Eaves said, “ESPN has allowed us to express ourselves in this moment."

“If it feels and looks different and looks personal, it’s because it is. At ESPN, we deeply care about the issue of fairness and equality, and the people we cover clearly share that point of view. That’s why this feels unique. This is a time when everything is heightened with so much uncertainty and feeling fear, but what you hear and see is about simple humanity.

“What’s happening now, I can see it and hear it — this need to explain this sense of isolation within the African American community that is the source of so much pain.”

Eaves, a former news anchor at Al Jazeera was almost a no-show for work at ESPN “because some of the reaction to recent events reminded me that there are several people watching me right now who feel the color of my skin makes me less worthy of basic human rights and dignity. And the thought of providing those people with news and entertainment literally made me sick to my stomach.”

Strauss writes that it remains to be seen how long sports media prioritizes social justice. "The next few months should be telling. On Friday, Trump took to Twitter, calling again for NFL players to stand during the national anthem, a favorite wedge issue of his in the past. And games will return this summer, led by the NBA, just as the presidential campaign heats up."

And all eyes are on ESPN, the license giver for media straying from sports.